We had only just left our Okavango camp in the early morning, when we came across a pack of African wild dogs that were hunting.  It is hard to stay with dogs on the hunt in a game drive vehicle, and after a while we lost them. Whilst they were in thick brush, they had killed an impala.  By the time we got there, most of the kill was already eaten.  A group of spotted hyaenas were in attendance, and there were a few skirmishes between them and the full-bellied dogs.  The dogs began to move off, as the hyaenas finished off what little was left of the carcass.  With the food almost done, there was little need for competition between the dogs and hyaenas. 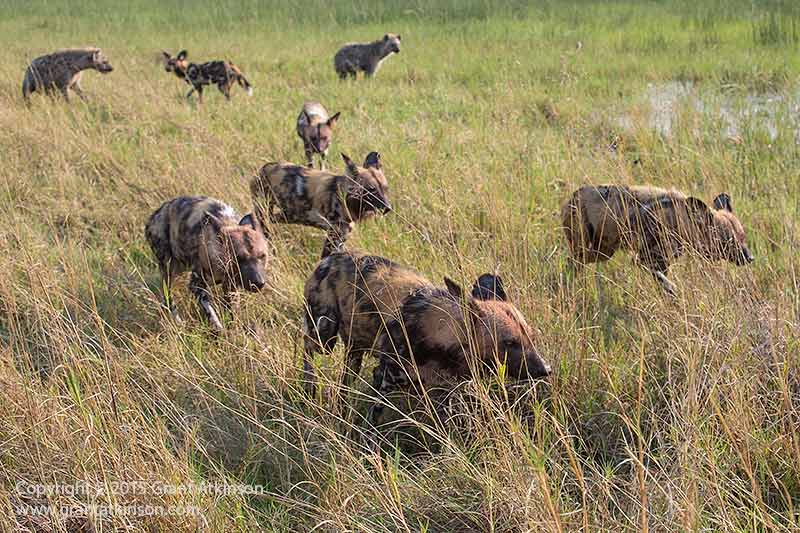 The dogs had spent the whole morning moving along the edge of a Delta channel, looking for a safe and shallow place to cross.  Each time they had tried to cross, the deep water had turned them back.  They kept moving, looking for the right crossing place.  Crocodiles pose a very real threat to African wild dogs, and they go to some lengths to avoid deep, open water.

The spotted hyaenas kept on following the wild dogs.  They were hoping that the dogs would hunt again, and wanted to be close by so that they could try and steal the dog’s kill.  In some places wild dogs lose a high proportion of their kills to spotted hyaena.  The dogs eventually came to a green marshy area alongside the channel.  It was a perfect area for photography.  The dogs were milling about, a few of them scanning the water for danger. 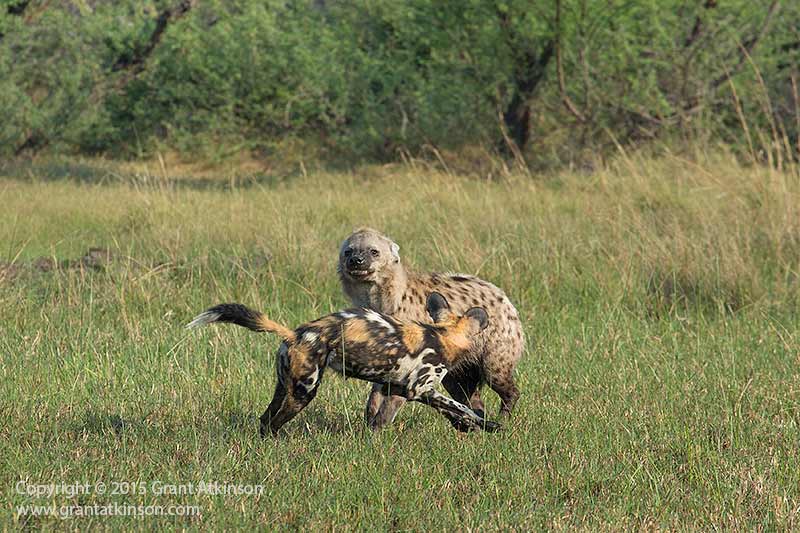 I noticed one wild dog hanging back from the rest, and getting very close to a young spotted hyaena.  I was surprized to see the two animals approach each other almost playfully at first, and then the wild dog jumped away.  What happened next suprized me even more.  The dog and hyaena approached one another again, cautiously at first, and then began to smell each other, even touching noses at one stage. 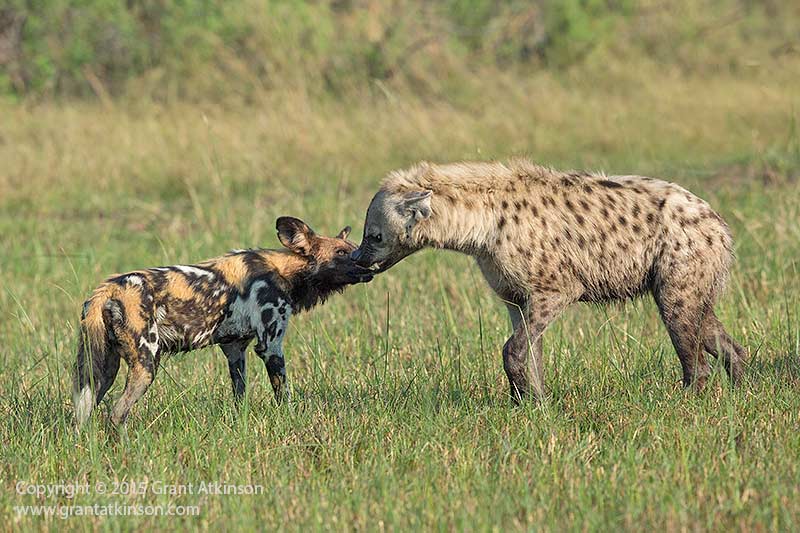 A bigger, older hyaena then made its approach and sidled up to the younger hyaena.  All three animals were clearly showing a lack of any aggression.  Their movements were slow and cautious, and they had their tails lowered.

The hyaenas then walked around the back of the dog, sniffing its’ rear, but the dog moved away a little.  The hyaena tried again to circle around the rear of the wild dog.  It is typical of hyaena to try and smell other hyaena rear ends and genitals during greeting rituals.  The wild dog allowed them quite close but not within touching distance, moving away each time.  All three animals then stood for a little while, before calmly moving apart.

This curious coming-together of these two species was something quite unusual.  As competitors, they typically don’t tolerate such close proximity of each other.  Typically, wild dogs will chase spotted hyaenas away, especially when they have pups, or when they have a kill.  Hyaenas are quite likely to ignore wild dogs if there is no food around, and sometimes the wild dogs ignore spotted hyaena. If the wild dogs have make a kill, the hyaena will usually try to steal it.  Whether they succeed or not depends on how many hyaena there are as well as how many wild dogs, and who is hungrier.  Clashes between the two species can lead to injury or even death, and both species will ramp up their aggression levels depending on how they perceive the threat from the other animals.

Watching this meeting reminded me of the solitary wild dog that lived with a few groups of jackals near Mombo camp, also on Chiefs island, after she lost the remainder of her pack.  That female also used to greet young spotted hyaena too, when she first began living solitarily.  That dog was forced by circumstance though, to live alone, and her social instincts became stronger than her own sense of identity.  The dog I am writing about here though, was not solitary, and was part of a healthy and successful pack of its own kind. 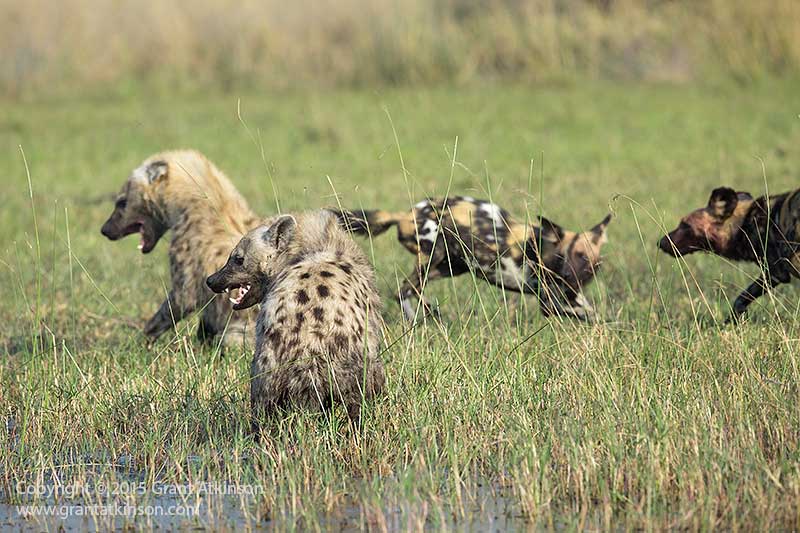 Seconds after this, things returned to ‘normal’ when a few of the wild dogs launched a sudden attack on the two hyaenas.  They drove the hyaena backward, into the shallow water, and pressed home the advantage of their numbers.  The two hyaenas snarled and bared their teeth, but moments later they broke and ran, with wild dogs snapping at their vulnerable hind quarters. 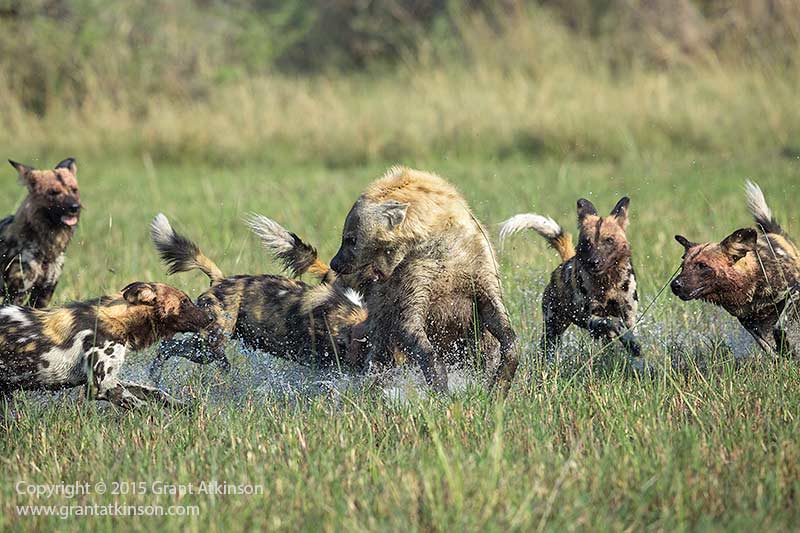 The dogs broke off their chase quickly, and without any more hesitation, went splashing through the channel. 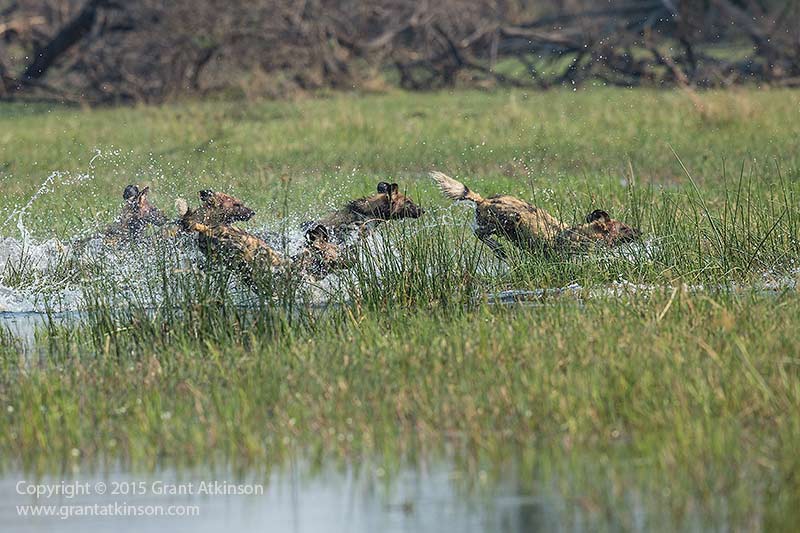 Moments later, their tails disappeared into the woodland, and that was the last that we saw of them for that stay.  I lead several photosafaris each year to Botswana, spending time in locations where we have a good chance of encountering African wild dogs.  To find out more, check out my 2016 schedule.