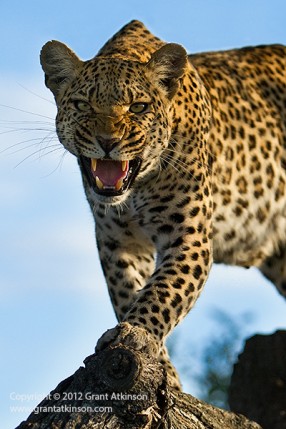 A female leopard photographed in threat. This female had been looking away from our vehicle, and was preoccupied with the sounds of lions in the distance. Upon turning suddenly in order to descend from the tree, she was momentarily surprized by our vehicle and the eye-level position we were in. She gave us a warning hiss, then quietly descended from the tree that we photographed her in. This image was taken at Mombo camp, and the leopard is the same cat that has been filmed for the National Geographic film, Eye of the Leopard.