In wildlife photography, portraits “may” be some of the easier images to capture, especially of big cats.  All you really need is a subject that is near enough, and posing well for you.  Portraits are usually easier to capture if the subject is not moving.  Although I have captured my fair share of portraits of some of the wild animals that I photograph often, this doesn’t mean that I am bored with taking portraits.  I do not belong to that school of thinking that says “It has all been done before so I won’t take that picture”   I am passionate about big cats, and I enjoy trying to take portraits of them that show how I see them. 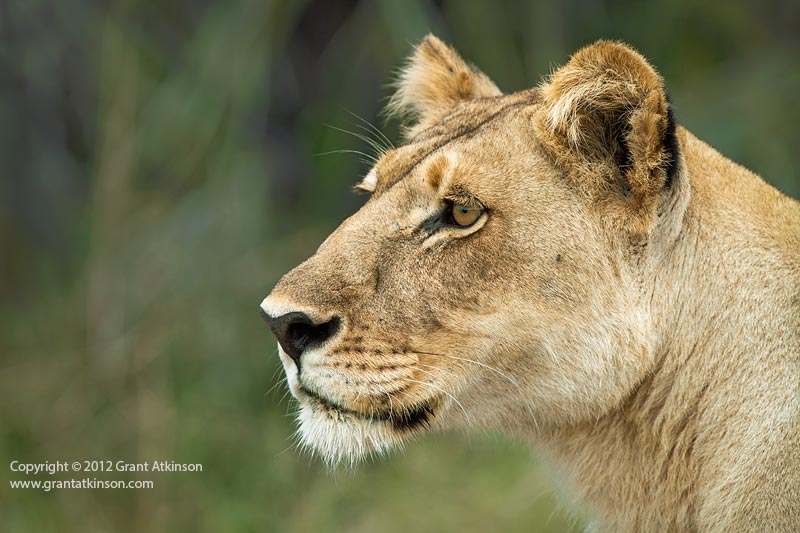 In fact, the more portraits I take, the more I realize that there are many small elements that can add much to a portrait, and every one is different.  I took the image of the focused lioness only after she noticed some wildebeest in the distance.  Until that time, she had been awake and upright.  At the instant that she became aware of the wildebeest in the distance, her ears came up, her eyes widened until I could clearly see her pupils, she extended her neck slightly, and she focused with an intensity that only cats like her can show.  After a while she lost some interest in the wildebeest, and relaxed her pose.   I shot with an open aperture to blur the background, and to help the cat stand out better.  When it comes to colours, backgrounds can work well to enhance the overall image.  In this instance, the green out-of-focus vegetation works as a pleasing background, and it sets off the brown tones of the lioness well. 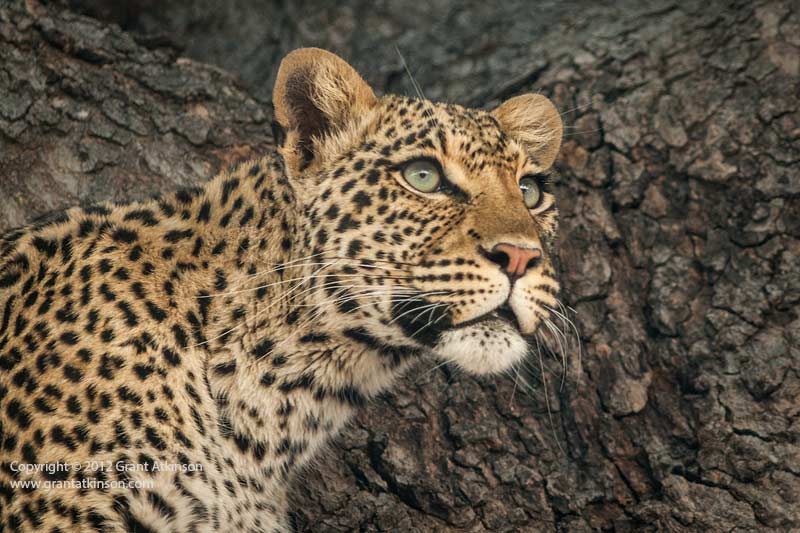 Backgrounds can be very important for portraits.  For this older leopard image, I chose to frame the leopard against the dark bark of a jackalberry (Diospyros sp) tree.  The dark bark serves to provide a good contrast in colour to the cat.  Equally, the textures in the bark contrast  well with the textures in the leopard’s coat, and it tells something of the cat’s habitat.  Again, the alert, wide-eyed pose that the cat is holding, adds to the  image for me.  This female leopard had been higher up in the tree, and hidden by foliage.  We waited until she made her way down, and on the way she paused to take a good look around, which is when I was able to take this frame.

Usually the thing that makes a big cat (or in this case a little big cat) portrait stand out above all else for me is the expression on the animals face and that is driven by the eyes.  Light, shadows, perspective, colour and background all play a role in how the image comes across, but none of those is as important as expression.  The female lion cub in the image above was moving with her mother and siblings, but was a few metres ahead of them.  When she chose to climb through an opening in a termite mound, we were waiting for her to come out.  She came through the opening very carefully, one paw at a time, and when she peered toward us with a strongly curious, but cautious expression,  I took this frame.  Her big eyes seem to show exactly what she is thinking.

I continue to take portraits of big cats, and in fact of all the wild creatures that I get to photograph.  Most of the time, my favourite portraits have come about after waiting for the subject to do something that placed them in an interesting pose.  This can often take place when there are other members of their species nearby or interacting with them.

Using a good zoom lens with enough reach like the Canon EF 70-300L f5.6 IS can mean that I am able to rapidly change focal lengths when a portrait-taking opportunity presents itself, and that can make it easier.  For good big cat portraits, I find I need a minimum of 300mm of focal length.  I try to train myself when I am photographing such sightings to keep thinking about different focal lengths.   It is all too easy to get so absorbed by the activity that I am watching that I forget to think about other types of images, like tight portraits.  I also really like taking portraits with the Canon EF 300 L f2.8 IS lens, as it gives great control over background blur and fantastic image quality.  Longer focal lengths like 400-600mm can be even more effective.