Legadima The Leopard Makes The Cover

Legadima The Leopard Makes The Cover by Grant Atkinson 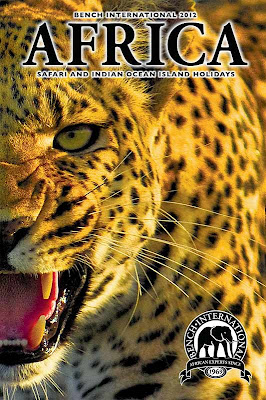 The image of Legadima the leopard is one from a sequence I took a little while ago.  This frame was recently selected for the front cover of travel company Bench Internationals 2012 Africa brochure – www.benchinternational.com.au
One thing about viewing and watching wildlife is that you really just never know what is going to happen out there and the day that I took this shot was one of those occasions.
The well-known female leopard had two young cubs with her at the time, and was busy feeding on an impala kill that she had dragged under a bush.  I parked my vehicle alongside a tree that I had seen the cubs playing in, the day before.  When we unexpectedly heard lions roar very nearby the adult female leopard climbed the very tree I was parked alongside to look out for the danger.  For reasons unknown she then turned right around and decided to come down a very small branch toward us, and in the process gave us a bit of a warning snarl before relaxing and slipping quietly by the side of the vehicle without giving us another look. 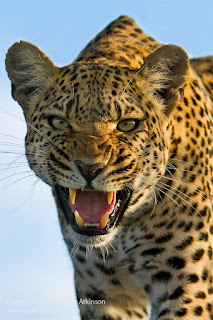 For those with a technical interest in the photographic background to the shot, I was using a Canon 7D and 70-200f2.8 IS I combination at the time.  The leopard had been in deep shade only moments before, and I had the lens wide open at f2.8 to make sure I had enough shutter speed.  When she turned and walked into the light without warning, I had no time to change the aperture, and just blazed off six or seven frames, trying to capture her warning pose, and her approach.  This resulted in my shot settings being less than ideal, at 1/3200 sec and only an aperture of f/2.8, at iso 400.  With more time on my hands I might have chosen to shoot with more depth of field than what f/2.8 gave me, perhaps at f/4.0 or even f/5.6, but in the end, it did not matter, as the quality of the resulting image was good enough for what was needed.  The folk at Bench International chose to crop the cover shot out of the larger image shown alongside this text, for more impact.
In processing this image I had to carefully lighten some shadows on the darker side of the leopards face and apply selective sharpening.
It just goes to show that content is usually more important than shot settings when it comes to wildlife photography, as long as your settings are more or less acceptable.
By Grant Atkinson|February 20th, 2012|Wildlife|4 Comments