Leopard versus wild dog, in the Okavango Delta

Seeing Africa’s large carnivores is always interesting, but at times it can turn out to be quite thrilling.  I was leading a small group of photographers at Chitabe camp on a private photosafari in Botswana’s Okavango Delta.  We were enjoying watching a big pack of about twenty African wild dogs.  With the adults were six puppies that were old enough to move with the pack.  The dogs were feeding on an impala they had killed.  With so many pack members, one impala does not last long.  As is normal, some of the dogs were not feeding, but rather keeping a lookout for anything threatening.  When one of the dogs on guard duty suddenly charged off, the whole pack came instantly to attention. We realized that they had caught sight of a leopard that was very close by.  Wild dogs and leopards are fierce enemies.  Given the opportunity, a leopard might kill a solitary wild dog, and they are also very likely to kill young dogs and puppies to eat, when they can.  On the other hand, a pack of wild dogs will not hesitate to attack a leopard that they can catch on the ground, and this can go very badly for the leopard if it is not able to get away.  Driving closer, we found that the wild dogs had trapped the young and very hungry leopard in a small and shaky dead tree.  The leopard was perched somewhat precariously right on top of the tree, but she knew that she was out of the dog’s reach and the cat stayed quite calm.  I wondered at one stage whether the branches supporting her might break, but they didn’t. 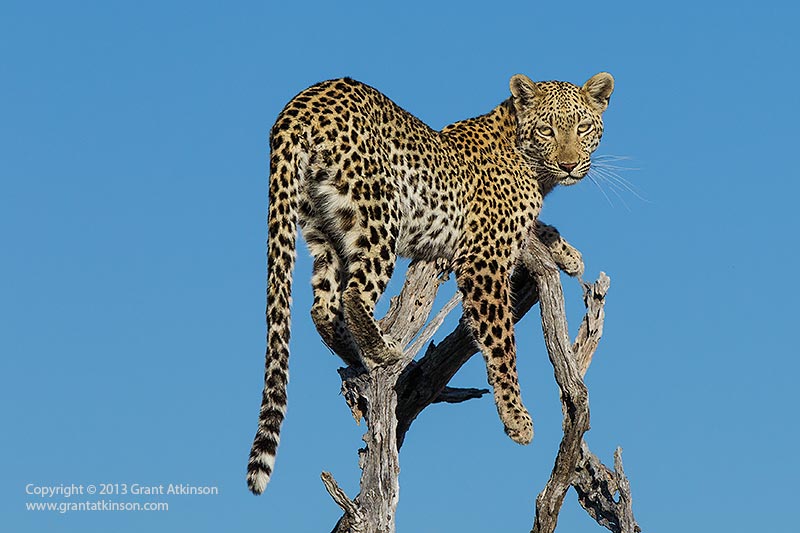 After a while the dogs trotted off , drawn by the lure of the impala carcass that their pack mates were still feeding on.  The leopard came down the tree very quickly, but instead of running away to safety, she just stood on the ground, watching the nearby dogs.  At that moment the dogs caught sight of her, and they charged at the leopard.  She turned and raced for the refuge of another tree, and made it just ahead of the chasing dogs. 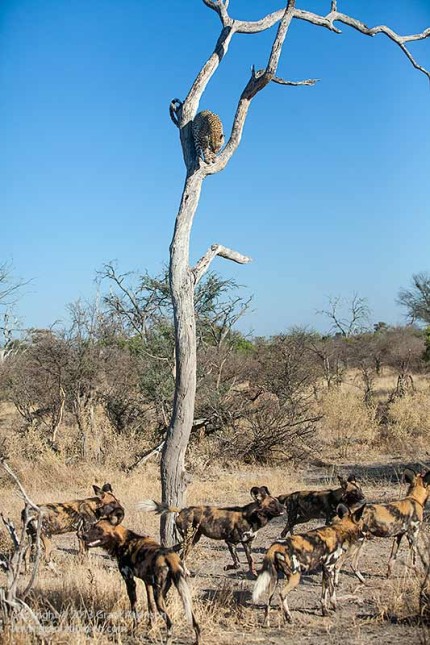 At least ten dogs then began milling about the base of the tree.  This tree was bigger and stronger, and the bold leopard actually began hissing at the dogs, baring her teeth, and even making short, warning charges down the tree trunk. 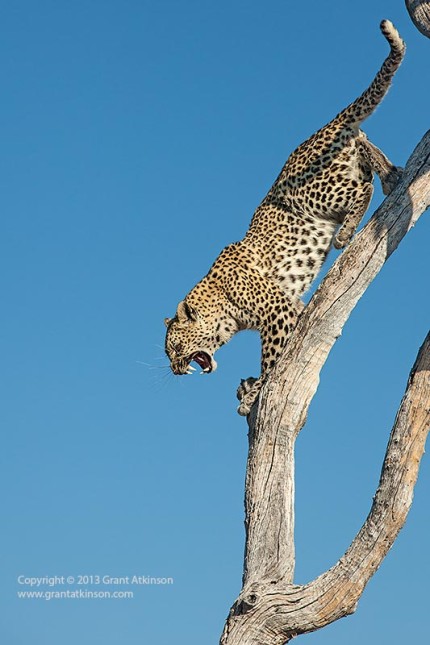 Of course, none of the dogs were frightened by the leopard, and she eventually climbed a little higher and just sat still.  Most of the wild dogs again began to lose interest and moved off to join the rest of the pack.  All except one wild dog, that was particularly eager to get to the leopard.  This dog hung around the tree for a long time, even standing on hind legs in order to get closer to the trapped cat. 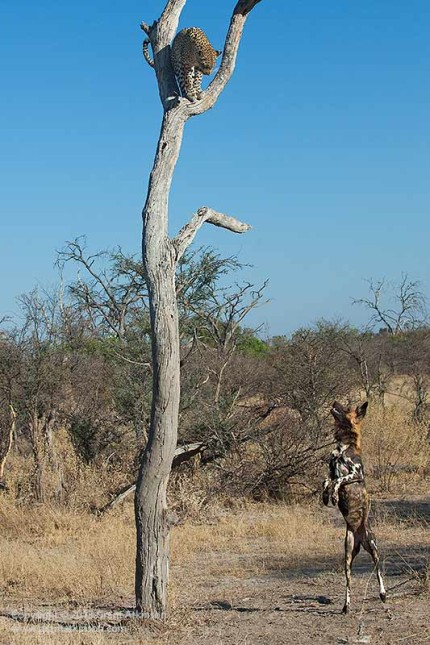 The leopard remained calm though, aside from the occasional threat display, and stayed safe in the tree.  Eventually even the last, most determined dog moved off to join the rest.  When the leopard made no effort to come down the tree and make an escape, I realized that this bold cat was actually focused on getting the impala carcass for herself.  Over the next half-hour the dogs slowly began moving off one by one into some nearby shade.  All the while the leopard remained in the tree, her gaze locked onto the carcass.  Just a few moment after the last dog had walked away, the agile cat crept downwards silently and quickly, with many a cautious glance toward the direction that the dogs had disappeared in.  She flattened herself to the ground, and inched closer to the carcass, one stealthy step at a time.  She gripped the impala skin in her mouth, and literally exploded into action, racing for the dead tree with dust flying out behind her.  With a desperate leap, she flung herself onto the tree trunk, and scrambled upwards. 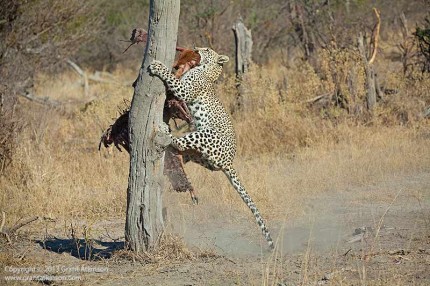 The dogs were alerted by the commotion, but no longer interested in the carcass, and remained where they were.  At this point the young leopard’s inexperience began to tell, as the impala carcass, which was made up of the animals backbone and attached skin and limbs, began to unravel as she climbed.  The higher she got, the more it hung down.  The leopard made it to the fork of the tree, but the carcass was dangling and swinging from her tightly-clamped jaw, and eventually she could no longer hold on. 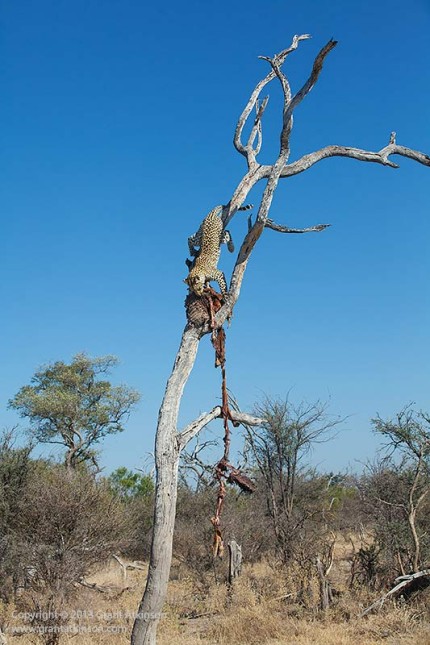 The leopard gripped the bones and skin tightly in her jaw, but was gradually dragged downward by the awkward weight. Canon EF 70-200 f2.8L IS ii, Canon 5Dmk2. Shutter speed 1/1600sec at f8. Iso 400. Click for larger view.

She opened her jaw, the skin slipped out and began to fall.  Somehow the leopard managed to snag the carcass with a single claw.  Still she could not manage to pull the dead weight back up with such a poor grip, and she ended up hanging downward, with the skin and bones dangling off one claw.  The weight of the carcass gradually forced her lower down in the tree. 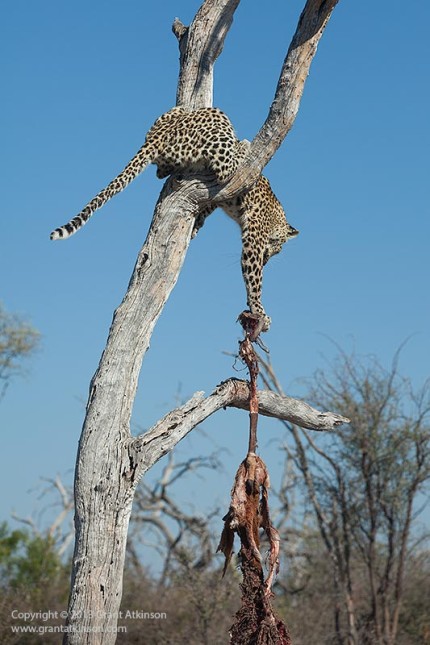 After several minutes of maintaining this seemingly uncomfortable pose and grip,  she dropped the carcass.  It thumped to the ground, kicking up more dust.  Quick as a flash the leopard darted to ground, gripped her prize more firmly, and raced back up the tree.  She managed to wedge it firmly along some high branches, and spent the rest of the day feeding quietly, undisturbed.

At dusk the wild dogs moved away without so much as a glance in her direction.  Watching this incredible interaction made me realize just how desperate the search to find food can become for predators, and never more so for younger animals that are still honing their survival skills.  On this occasion, the young female leopard had thrown caution to the wind, and benefitted at least a little from the wild dog’s leftovers.  The excitement I felt watching this interaction was tempered with a little fear for the leopard’s life, but it all turned out well in the end. 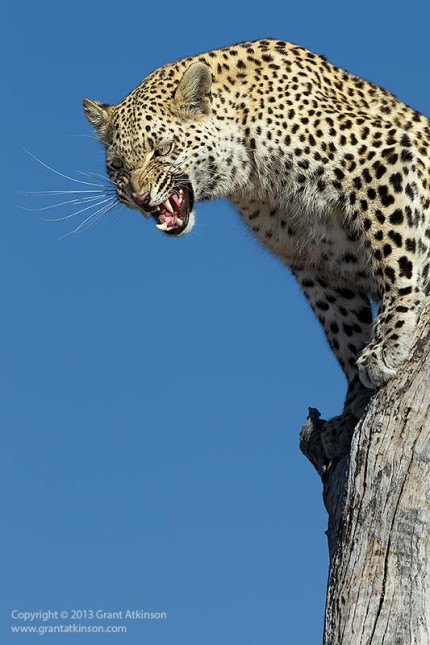 From a technical point of view, I made use of two lenses to photograph this interaction, the Canon EF 70-200 f2.8L IS ii, and the Canon EF 300 f2.8 IS.  I used two camera bodies, the Canon 5Dmk2 and Canon 1Dmk4.  I shot very fast shutter speeds, in order to be ready for any unexpected action.  Most of the images were taken with the shorter zoom lens.  The wider angles of view that it gave allowed me to fit both the wild dogs and the leopard in a single frame at times.  Such images better told the story of what was happening between the two species. Shooting with the zoom lens also gave me more flexibility when trying to photograph some of the action that can take place in sightings like this.  With subjects often moving in directions that were hard to predict, being able to change focal lengths rapidly was invaluable.