I was with my wife Helena at Mashatu, in Botswana, watching a sleeping hyaena mom and her youngster.  When the young hyaena stood up and began to show signs of curiosity toward our vehicle, I decided to forgo my long telephoto lens and instead switched to a 16-35mm ultra-wide angle lens. Using the wide-angle lens would give an unusual perspective to the image, but for the picture to work out, the hyaena would need to be very, very close to the camera. 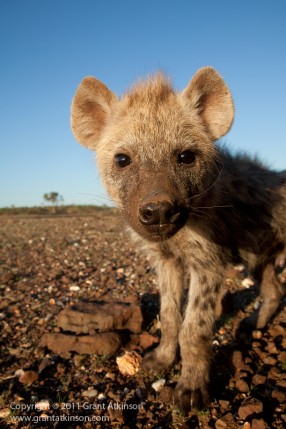 In preparation, I hung one arm over the side of the vehicle, and held the camera as close to the ground as I could get it. Then I waited.  The young hyaena was now gradually getting closer and closer to our vehicle, but on the side opposite to me.  Helena spoke in quiet tones and when she said:  “It’s coming to your side.” I made an extra effort to keep totally still. Young animals are often much more curious than adults.  This is normal, as they are still learning about their surroundings, and establishing their own set of boundaries.  When the little hyaena walked around the front of the vehicle and saw my camera hanging low, it immediately knew that there was something different going on.  At such times, even curious animals will become extremely cautious, and that is what happened next.  Ever so slowly the hyaena cub moved closer, one step at a time.  Any noise or sudden movement from us in the vehicle would have caused the hyaena to jump away at this stage, but we stayed still and silent.  Eventually the little hyaena was within a metre of my lens, and I was able   to start clicking away.  Initially the sound of the shutter caused the cub to step back for a moment, but curiosity won out and it approached carefully again, this time getting close enough to see its reflection in the lens element. 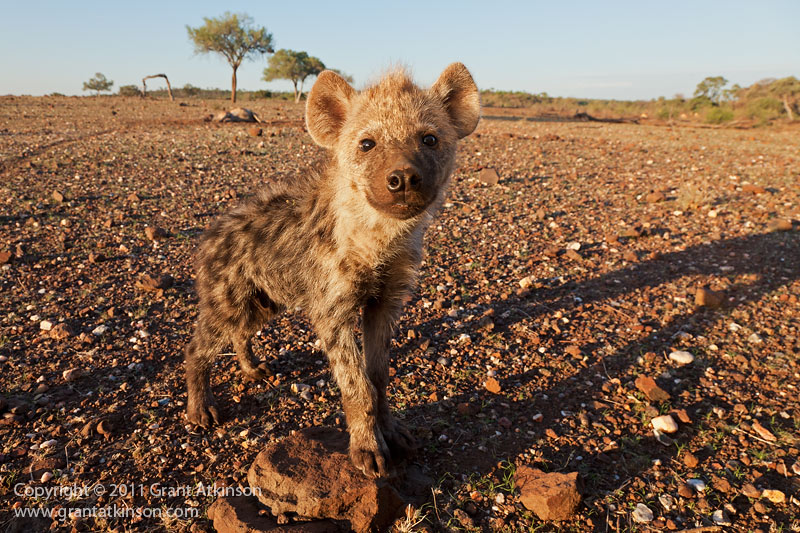 Obviously I was shooting blind, so I made sure to take a number of frames in the hope of getting a good one. As with so many wildlife photo opportunities, this one did not last very long.  The cub soon lost interest in my camera and wandered off.

It is always special when wild animals choose of their own accord to interact with you as an observer and photographer, and this was one of those times.