Leopards are interesting cats.  Not only are they elegant, and graceful animals, but they are also creatures of habit, at least for some of the time. 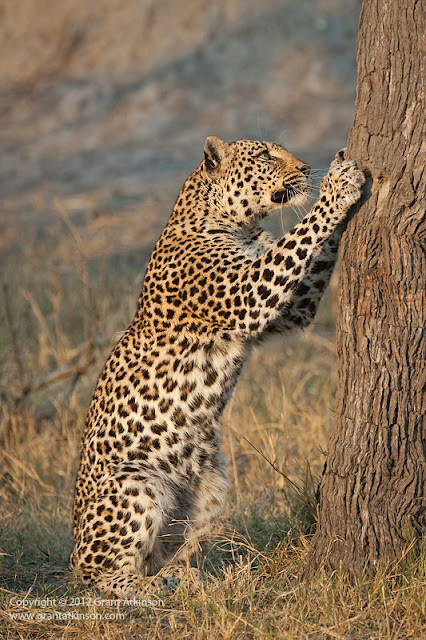 Aside from feeding, resting and sleeping, one of the most important things that a leopard needs to keep doing is marking.
Marking is what the leopard does in order to advertise its presence to other leopards.  Due to their solitary nature, leopards need to have some means of communicating with other leopards.  There are a variety of messages that they may need to send.
Occupation of a territory is an important one.  Female leopards may want to warn off other female leopards from the core parts of their own territory.  Male leopards may want to do the same thing.  On the other hand, a leopard of either sex that is intruding boldly in another leopards territory may want to announce its presence by marking, and perhaps pressure the resident cat to move off in this way.
Leopards also mark to share information about themselves with leopards of the opposite sex.  A female coming into oestrous may want a male to locate her quickly, and she may mark much more diligently during such times.
Marking takes a variety of forms, but perhaps the most interesting is that of claw-scraping.  Adult leopards will stand up against a tree trunk, or squat against it, and rake their claws deeply down the trunk.  This leaves a visible mark for other leopards to see.  The cats seem to have distinct preferences for certain tree species, depending on locality.  In the western Okavango, water-berries are a favourite tree for leopards to mark.   The marks may be just above head-height for a walking leopard, and easy enough for other cats to see.
Another form of marking takes place when the cats rub their cheek against a prominent shrub, or tree trunk.  All cats have a scent gland in their cheeks.  This leaves a scent mark behind, that may persist for some weeks, and will be easily detected by other leopards passing by.  It is possible that a fresh scent mark can carry information pertaining to sex, breeding condition and condition of the animal making the mark to another leopard.  The cats sometimes brush off hairs when marking in this way.
Yet another form of marking happens when leopards scrape the ground with their back legs, and leave visible marks in the ground, as well as scent from glands in their paws.
All of this behaviour is very interesting to watch.
Understanding and anticipating it can also provide the wildlife photographer with a chance to take unusual images.
A leopard that is patrolling and marking it’s territory may stand upright on its haunches and mark a bush.
It might also run it’s extended claws down the bark of a tree trunk.
The cat may also swish its tail from side to side after marking.
Also remember to take special note of the leopards tail.  Leopards have very long tails and it is very easy to cut the tail off when framing your image.  If the tail is important to you, leave enough space for it.
It is useful to have a zoom lens when photographing a leopard on the move, as it allows flexibility in framing.
By Grant Atkinson|July 4th, 2012|Wildlife|5 Comments