Capturing images of familiar subjects as silhouettes is an exciting challenge to take on with the camera.

I like the simple approach when it comes to silhouettes, and in this regard, it pays to choose subjects that are easily identified, even in profile. 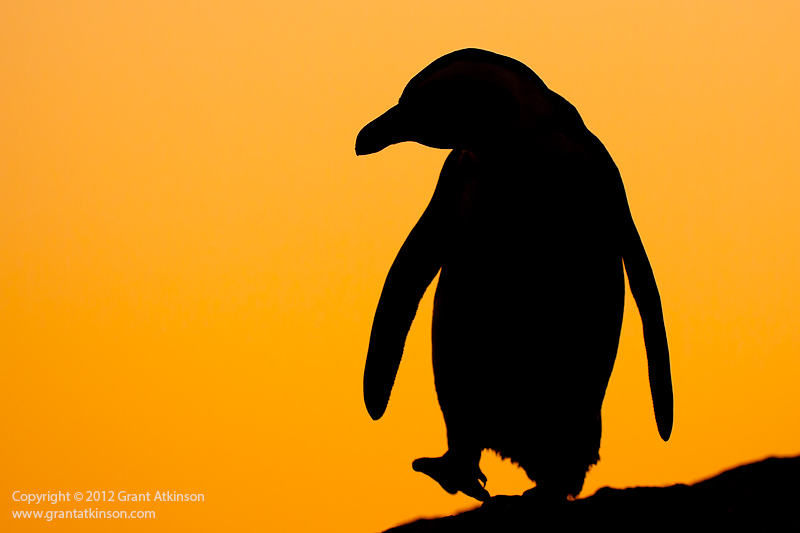 To capture the penguin image required that I be in position with the subject, before the sun even rose.  I actually clicked the shutter just moments before the sun was above the horizon.  The sun had begun to turn the sky orange, and I was able to position myself below the bird, which was walking along the top of a large rock, with the orange sky behind.  Getting the right kind of shooting location is critical for successful silhouettes.  Rocks, ridges and dunes are all good places to practice silhouette photography, especially if you can get the subject positioned against the sky.

It is not always easy to focus on dark subjects, as they often lack contrast.  In this instance, the penguin’s eye and face did not show enough contrast for the autofocus to lock on easily.  To counter this, I chose to place my focus point right on the edge of the bird’s outline, where it met the bright sky behind.  This allowed the camera to lock on quickly.  I shot using Ai Servo (for moving subjects) and with a single AF point selected.  I was using a Canon 50D and a Canon EF 300f2.8 L IS lens for this image. 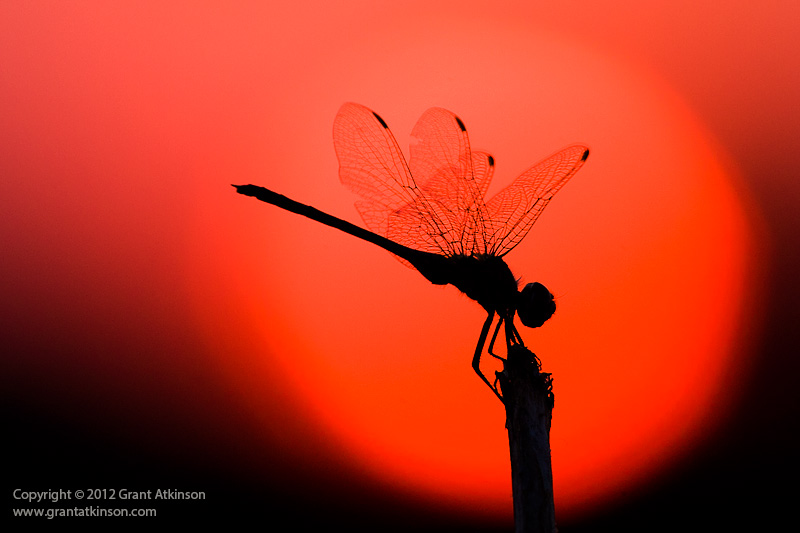 The second image described in this post is a silhouette  of a dragonfly, one of the dropwing group.  I had noticed that each afternoon, numbers of these insects were perching on tall dried-out reeds in an otherwise open area.  This was a time of year when there was a lot of suspended dust and smoke haze in the atmosphere.  Such a haze acts as a filter for the suns light, and when the sun gets low to the horizon, it becomes almost completely diffused.  It is then possible to shoot directly towards the sun, and incorporate it into the frame.

Once the conditions were suitable, shooting the image was straightforward.  I used a Canon 40D and a Canon EF 100-400 f5.6 L IS lens to take the shot.

Although it is possible to underexpose ones image with the intention of creating the silhouette in camera, I typically just shoot with my histogram enabled on my cameras rear LCD screen.  I can immediately see from there when I do need to underexpose.

For both of these images, I used Evaluative metering.  I underexposed the dragonfly image by one-third of a stop, to prevent any of the brighter reds from blowing out.

In processing I just darkened both images, and added contrast.