Hippo and lion interaction on the Chobe River

I was on the Chobe River, leading a photographic safari for Pangolin Photo Safaris  when we came across a lioness with her young cubs, feeding on a very young elephant that had died a few days previously, alongside the river.  Elephants that die are an important source of food for carnivores like these lions. 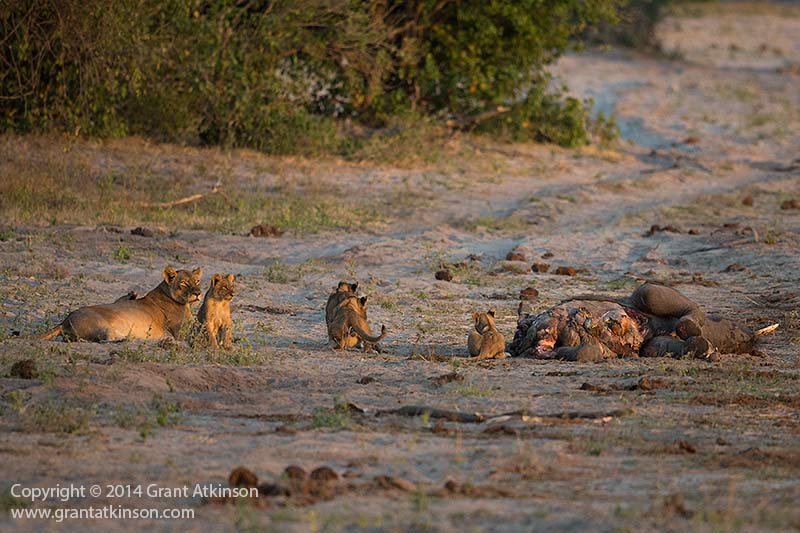 We were watching the lions from a distance when we noticed an almost submerged hippopotamus moving steadily toward them.  My first thought was that the hippo would get to the edge of the river bank, and perhaps stare at the lions.  There is no love lost between those two species.

However, the hippo kept coming, right into the shallow water, emerging directly opposite the elephant carcass.  At this point the lion cubs noticed it, and immediately they each grabbed a bone or morsel of meat, and they scampered away into the fringing belt of Kalahari star-apple bushes. 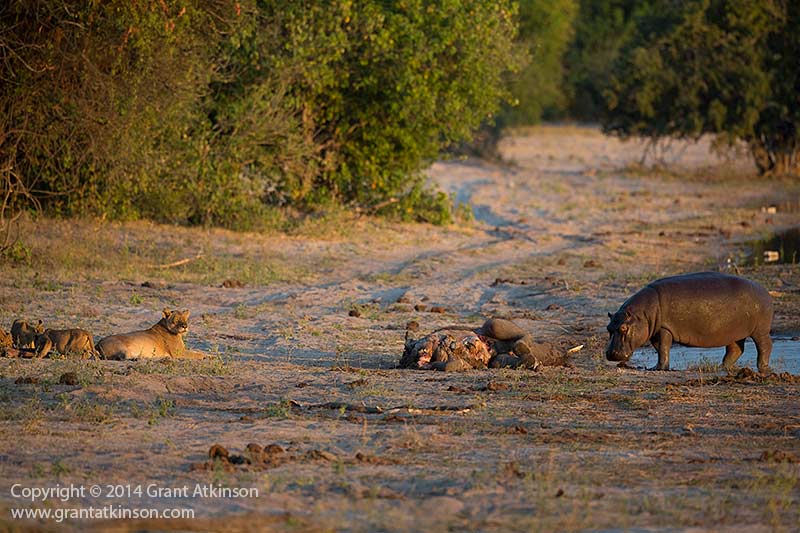 The lioness remained where she was, lying flat, on the other side of the carcass.  The hippo walked slowly but steadily closer, water dripping off its skin.  It was a medium-sized hippo, which still equates to a pretty big animal.  It sidled up to the elephant and began to feed.  My mammal reference book, Smithers, lists the hippo as an omnivore.  There are also many records of hippo feeding on carcasses, although I had never seen it happen before.

It was clear that the hippo was uncomfortable putting its head down to feed, and exposing itself, with the lioness so close by.  Now the hippo lifted it’s head, opened its jaws wide open in a threat display, and began to shuffle slowly toward the lioness.  The big cat remained crouched down, with ears flattened now in a warning pose. 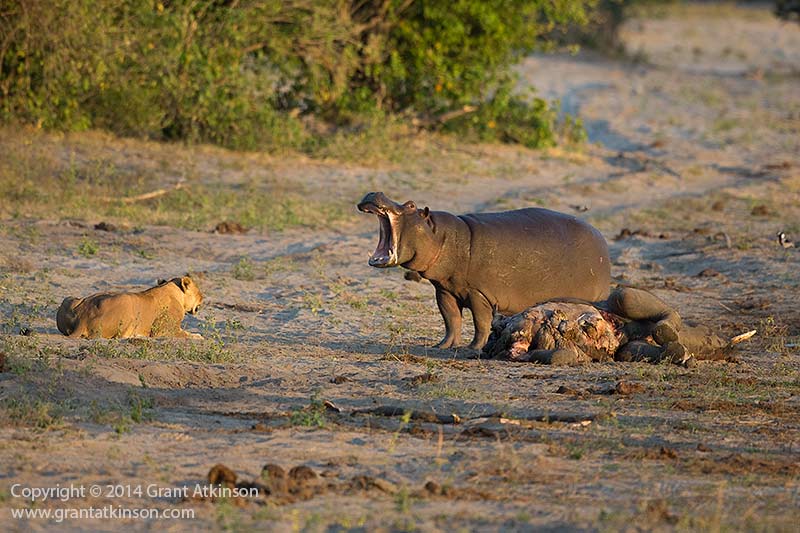 The hippo kept moving closer, and eventually, the lioness broke and ran off into the thickets where her cubs where.  The hippo waited a while to make sure she wasn’t coming back, and again began to feed. 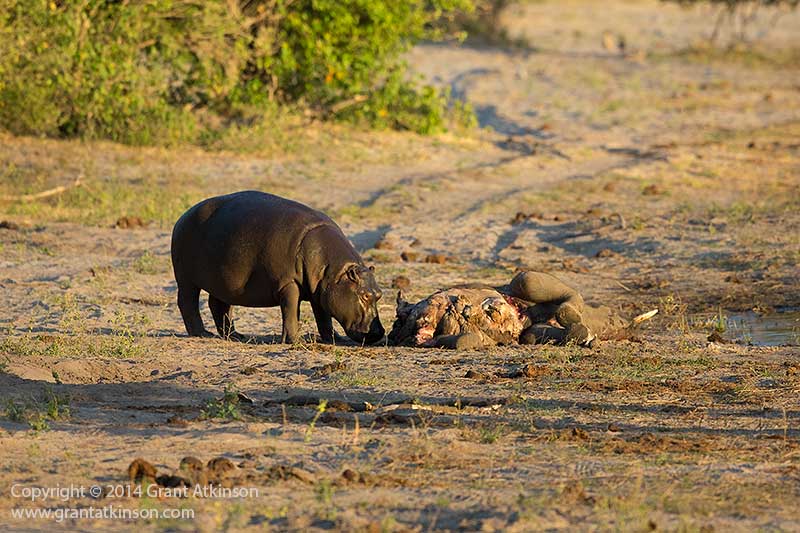 Hippo’s teeth and mouth are not really structured for eating anything other than grass, so for them to feed on a carcass is somewhat awkward.  The hippo would nudge, lick and scrape the carcass with its mouth half-open.  After perhaps fifteen minutes, the lioness returned, taking up a position just a little  further away this time, but facing the hippo’s rear end.  We could see she was showing her own intent, even if it was not overtly aggressive. 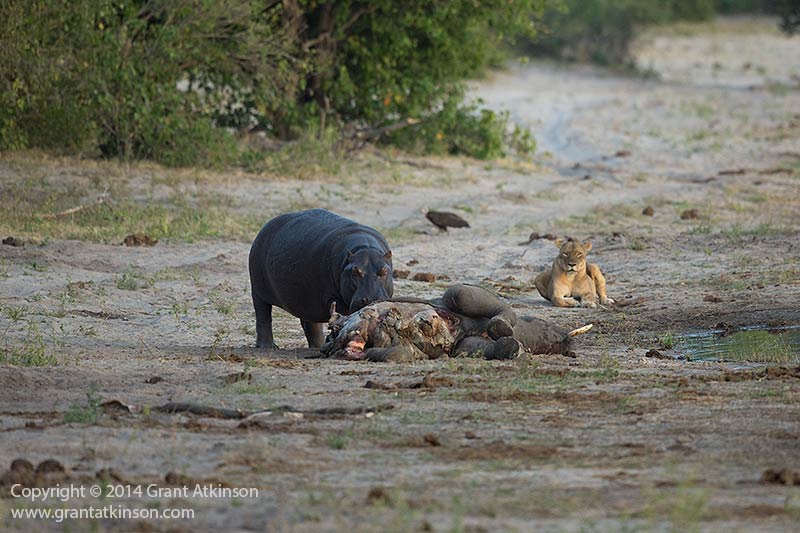 It wasn’t long before the hippo had enough, and slowly made it’s way back to the water, giving threatening jaw-gaping threat displays in all directions. 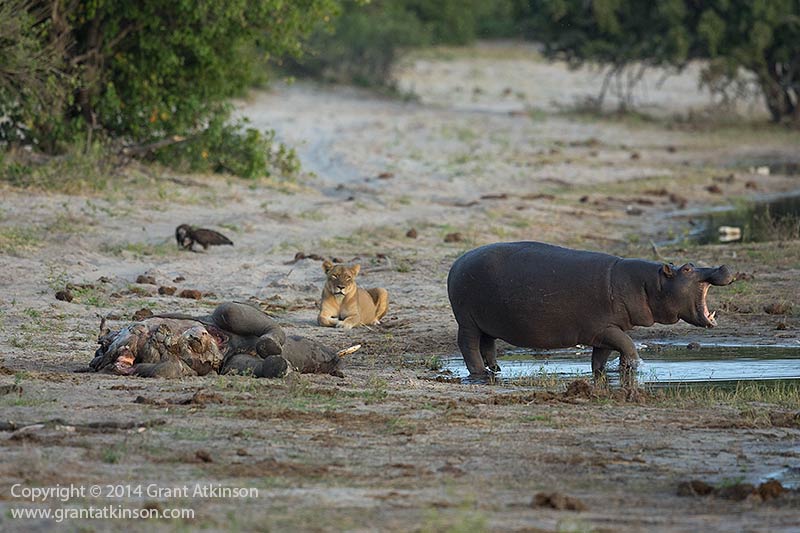 Later that afternoon, we found the lion cubs and their mother again, feeding contentedly on the carcass and happily enjoying the lack of disturbance.

I shot this entire interaction with my Canon 5Dmk3 and EF 500L F4 IS lens.