Elephant and wild dogs at Zimanga

Despite their immense size, African elephants sometimes show a strong dislike for carnivores.  This intolerance was clear to see on a recent trip that I made to Zimanga nature reserve in northern Kwazulu-Natal. 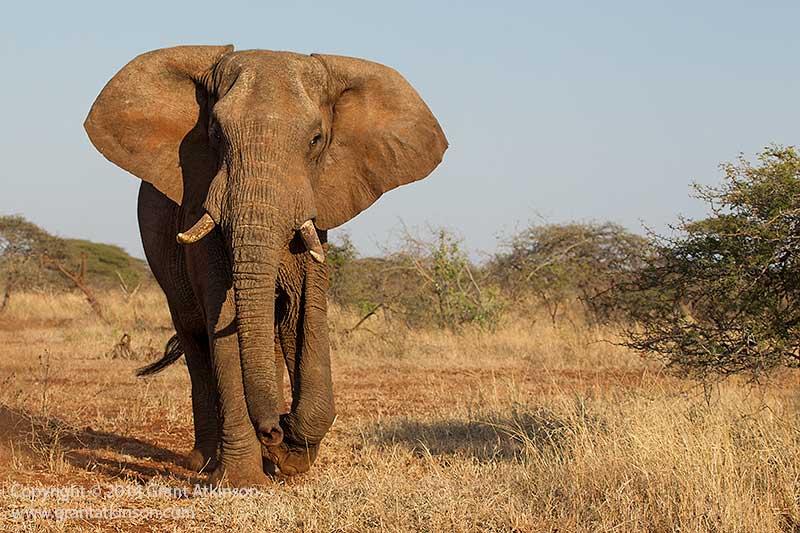 Early in the morning, we had managed to track down the local pack of African wild dogs.  There were four dogs in the pack , and they had just finished off feeding on a nyala antelope that they had killed.  The dogs were alternating between some social bonding and play when we found them.  They soon settled down to rest, with one dog taking up a position on top of a low termite mound. 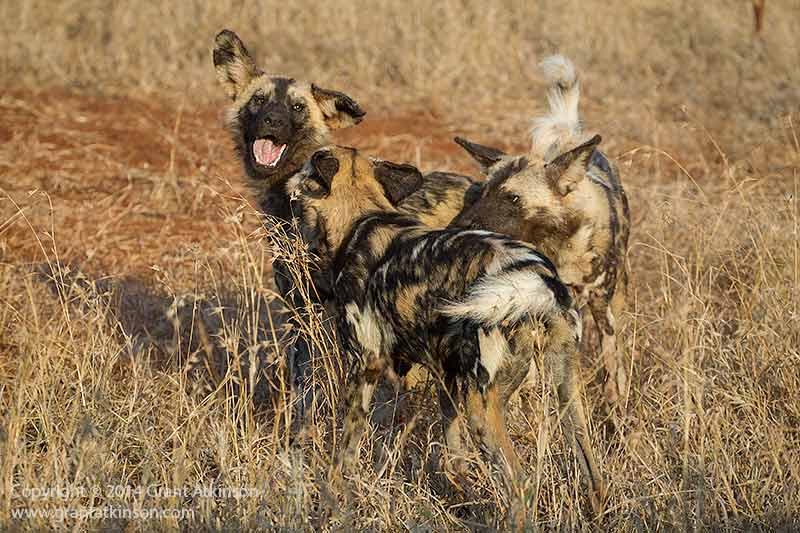 The dog pack at Zimanga consisted of four adult females.  The oldest dog was also the alpha female, and her three daughters were with her.  New male dogs were already on the reserve, but being kept in a separate sector becoming acclimatized to the area.  The plan is that the new males will be introduced to the pack of females very shortly, and a new breeding pack created.

Wild dogs have massive home ranges, and in smaller reserves, there can usually only be one pack at a time.  For this reason, these separate packs are managed by local conservation groups, and when young adults reach dispersal age, they are swopped out with dogs from other reserves.  This practice ensures maximum genetic diversity, and is known as metapopulation management.  There are probably less than 500 wild dogs left in South Africa, although numbers are slowly rising in some reserves.

The resting dogs lifted a head now and again to keep a lookout for any possible threats or opportunities.  A bull elephant was feeding on some acacia trees nearby.  It looked as if he would pass by the dogs and their kill, but as he came alongside, he raised his trunk to the air and came to a stop.  He had obviously smelled something, perhaps the dogs themselves or the carcass of the nyala.  He turned in the direction of where the dogs were lying, and began to walk faster.  Our guide, Brendon Jennings, immediately backed the vehicle out of the elephants path, and we got our camera’s ready. 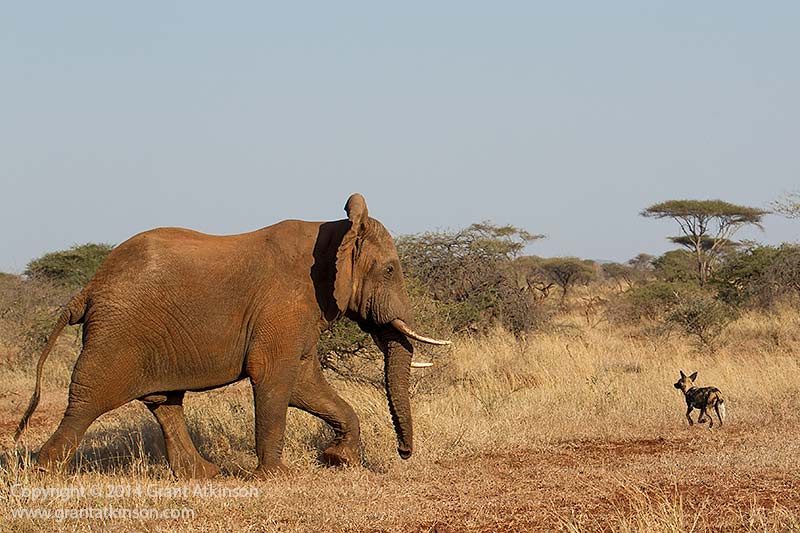 Using his powerful sense of smell, the elephant made his way unerringly towards the nearest dog.  The wild dog waited until the elephant was quite close before jumping up and running off.  In a kind of disdainful manner, the dog immediately lay down again.  The elephant followed up.  Now some of the dogs moved behind the elephant.  He turned and lumbered off after them.  The elephant then spent the next twenty minutes trying to move the dogs.  At one point he charged a dog that was walking casually across his path, and then spun around when a second dog passed close by to him going in the opposite direction.  The wild dogs were much too fast for the elephant to have any chance of catching them, but the bull was determined. 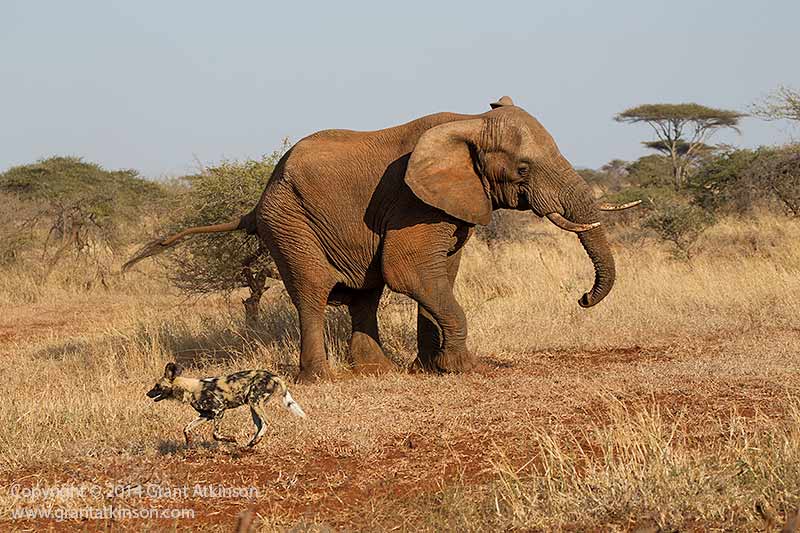 After perhaps twenty minutes of back and forth herding by the elephant, the wild dogs finally decided that enough was enough.  They gathered together and left the area, to seek out a quieter resting place for the day. 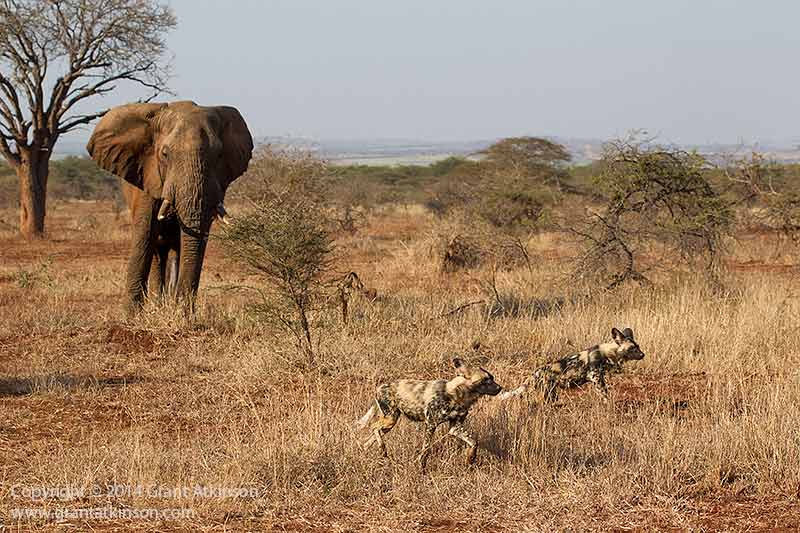 The elephant didn’t stay around too long, and he continued on his way, in the opposite direction that the wild dogs had gone.

Watching interaction between wild animals in their wild habitats is always fascinating.  The bull elephant had no need to feel threatened by the wild dogs.  He was much too big and powerful for the dogs to remotely consider as prey.  Despite that, the elephant used up a good chunk of time and lots of energy on getting rid of the wild dogs.  In some places, young elephants can become prey for spotted hyaena and lions.  I wondered whether the elephant merely thought of all carnivores in the same way, without differentiating at all.  That might explain the persistence he showed in driving the dogs away.

It was an exciting sighting to watch, and to photograph.  I like using zoom lenses when photographing action like this, as it allows me to keep recomposing quickly as the subject move about.  I took all the images accompanying this text with the fast-focusing Canon EF 70-300L f4-5.6 IS.

For those with an interest in visiting Zimanga, I will be leading more photo workshops there over the coming year.  To find out more, check out Pangolin Photo Safaris website here.