Almost every wildlife photographer that visits an African game reserve would like to take a picture of a leopard in a tree. However, once you start trying to do this, you begin to realize that it can be a little more difficult than it seems.

Perhaps the biggest difficulty emanates from too much contrast. This can happen when you have a bright sky as part of the background. One of the hardest situations occurs when the sun is overhead, and a leopard is on a tree branch, partially sheltered by leaves. What typically happens in such instances is that the bright patches of light that show through the leaves turn out as burned-out highlights. If the contrast is too great, then one approach may be to use a little flash in such a situation. 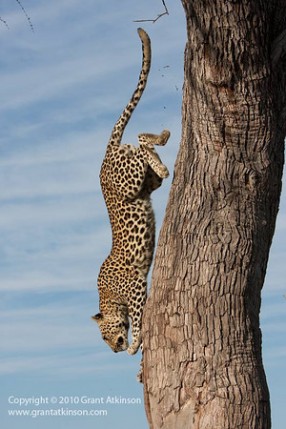 Canon 40D and 70-200f2.8 IS lens. Shutter speed was 1/1000sec at aperture f/8.0. Iso was set at 400. Metering was set to evaluative, and focus mode was Ai Servo. I photographed this female leopard in direct light in the morning, as she descended this steep tree trunk. I shot at a fast shutter speed in order to freeze the cats downward rush. I had waited almost half an hour for the cat to come down, so was totally ready when it happened. This image was made at Savuti camp.

Even in perfect light from a low angle, like one gets in the later afternoon, or early morning, the contrast can be too great between the bright sky and the rest of the image. Framing then becomes very important, and it may be an option to include less sky in such instances. The brightness and colour of the sky are very important. Dark skies that form during storms can make excellent backgrounds.

Overcast days can be excellent conditions to photograph leopards in trees, as there are no deep shadows to have to deal with. Lightly overcast days are usually best. 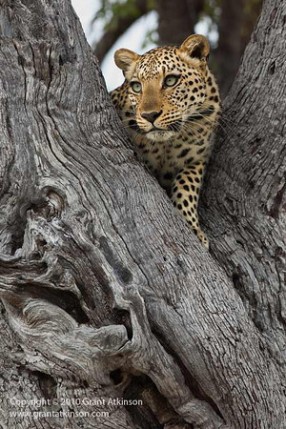 Canon 5D, 300mm f/2.8is lens. Shutter speed was 1/125sec at aperture f/5.6, at iso 500. Evaluative metering with 1/3 stop positive exposure compensation, to make sure enough detail was captured in the leopards face. This image was taken on an overcast day, and in order to minimise the dirty white sky, I chose to shoot vertically, as the tones of the leopard and the tree were easier for the camera to combine than the sky. Shooting tight in this instance also brought out the contrast between the textured lines of the tree trunk and the leopard’s fur, and emphasized the intensity of the cats expression.

Leopards don’t spend all their time in trees which means that there are also photo opportunities to be had when they are coming down or going up. A leopard in a tree that is yawning, stretching and grooming may be about to descend. That is a good time to make sure that your shutter speed is fast enough to freeze the downward rush or leap. In such instances I try to shoot at a minimum speed of 1/1000 second. Low light may not allow for such a fast speed though, and it is in such conditions that faster lens with apertures of f2.8 and f4.0 can make a big difference. Newer camera bodies that can shoot clean images at higher ISOISO settings like 800 – 3200 are also invaluable for this type of shooting. It is better to have an image with a little noise to deal with from a high ISO setting rather than an image that is soft due to subject movement. 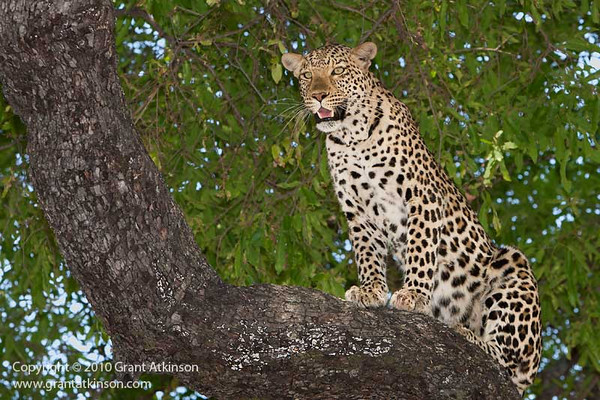 Canon 1DmkIII, 70-200mm f/2.8 IS lens. Shutter speed was 1/300sec at aperture f/6.3. Iso 500. Exposure Evaluative, with plus 1/3 exposure compensation. Focus mode was Ai Servo. I used a Canon 580 EX flash, dialled back by minus 2/3 of a stop, to just throw some more light on the leopard, but not reach the background. My framing was influenced by the strong shape of the tree, and I left out the leopards tail. Including it would have meant that much more bright backlighting would have been introduced, and the leopard would have become smaller in the frame.

A leopard that is walking on the ground amongst trees, and glancing upward, is very likely giving an indication that it may be about to climb one of them. Watch the cat very closely to see just which particular tree it stares at. Knowing which tree may give you enough time to get yourself positioned and ready before the action happens. Whether you have a leopard in the tree about to descend, or one on the ground that may be about to climb up, it helps to get your focal length right. If you have the time and are waiting, it pays to practice with the camera by aiming exactly where you would like to frame the leopard going up or down the tree. Whilst you do this, note changes in the shutter speed as the amount of light will likely differ. 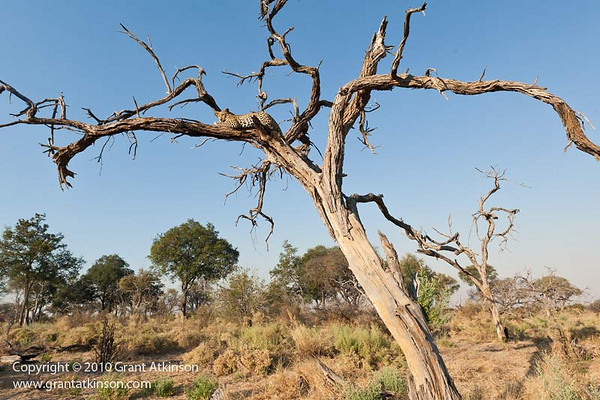 Canon 1DmkIII, 16-35mm f/2.8 lens. Shutter speed 1/400sec at aperture f/9.0 Iso 400, metering Evaluative, focus mode Ai Servo. Plus 1/3 exposure compensation. The relaxed nature of this leopard enabled me to get very close to the base of the tree, and make use of a wide-angle lens, to try and give a different perspective to the shot. Direct light, the completely open dead tree, and a clean blue sky meant that contrast was not much of an issue. This image was taken at Chitabe Camp.

One also needs to consider whether to include the leopards’ tail in every shot or not. This may sound a strange statement, but as leopards have very long tails, zooming out to get the whole cat and the tail in often mean that the leopard becomes much smaller in the frame. Cluttered or bright backgrounds can also be hard to exclude when trying to include the tail. Just be aware of this and give it some thought as every opportunity will be different. A leopard’s tail can add a whole lot to a shot, as they are strongly contrasting, and the position of the tail tells something of the cats’ mood. 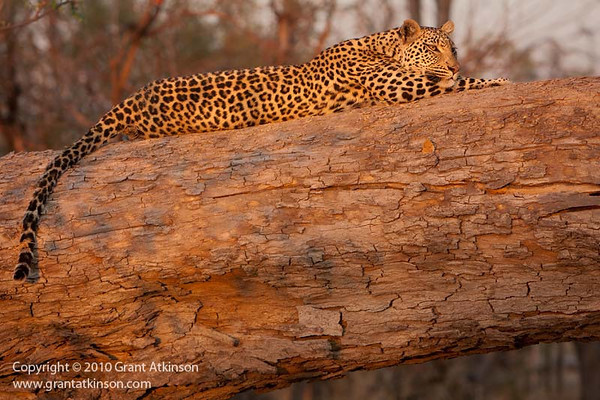 Canon 40D and 70-200f2.8 IS lens. Shutter speed was 1/500sec at aperture f/4.0. Iso was set at 400. Metering was set to evaluative, and focus mode was Ai Servo. A female leopard photographed in the last direct light of the afternoon. The light was softened by a dust haze, which is prevalent during much of the dry winter months in Botswana. In order to minimize the grey colour of the sky, I framed the leopard and tree trunk tightly. The background immediately behind the cats head is a little distracting, but there was little I could do about that other than use the open aperture to help blur it out somewhat.

To summarize, when photographing a stationery leopard in a tree take into account the direction of light, the background, the sky and contrast. If the leopard is about to go up or come down the tree, think of all of the above, as well as shutter speed, framing, and anticipation of the movement.

The images accompanying this text have detailed descriptions attached to them of camera equipment and settings, as well as the thought processes which went into the making of each one.

Canon 5Dmk2, 70-200mm f/2.8IS lens. Shutter speed was 1/160sec at aperture f/5.0, iso 800. Metering set at Evaluative, focus mode Ai Servo. Taken just after the sun had set, this silhouette was made possible by the sun lighting up the clouds after it had set. This image was taken at Chitabe camp, in the Okavango Delta, Botswana. In low light situations like this, it is easiest to focus on the edge of the leopard. I cloned out some distracting vegetation below the leopards feet.