Panning is the word used to describe the method of taking an image, usually of a moving subject, with the camera set at a slow shutter speed. The photographer makes sure the camera follows the subject at precisely the same speed. The aim is to match the speed of the subjects’ movement with the movement of the camera lens, in the process blurring the background. When done correctly, this technique can produce extremely interesting results, and it is one of the most creative styles of nature photography.

Panning is not the easiest technique to master, and it takes a lot of practice to start getting consistently good results. 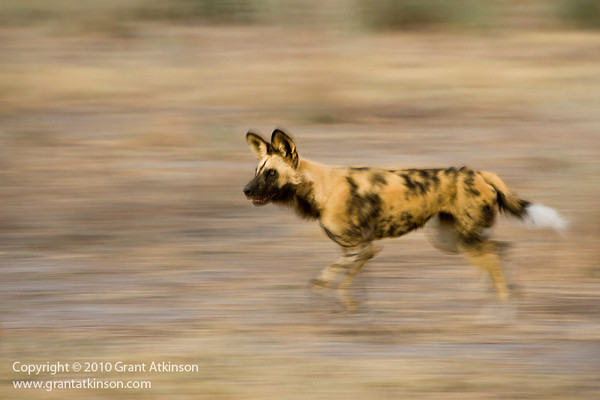 The movement of the subject is most important. The animal should be moving, preferably at a fixed distance from the photographer. What this means is that most good panning shots are taken from the side. It is very difficult to get good results when the animal is headed directly towards you or away from you. The best shots usually come from an animal moving at right angles, across the photographers field of view.

As a very rough guideline, I try to use shutter speeds as slow as 1/6 second for animals that are walking or moving by slowly. It is quite surprising just how much motion can be captured even of a walking subject. Animals that are running make it easier to use faster shutter speeds, and in these instances I typically use speeds from 1/13 second t0 1/20 second. Birds in flight can be shot at speeds of around 1/80 second. Of course the choice of these speeds is open to the photographer, and how much of a blurring effect they are looking to achieve. Remember that shooting walking animals at very slow shutter speeds can actually be more difficult, as it is harder to keep the camera moving smoothly and slowly for longer, and camera shake is more likely to occur. 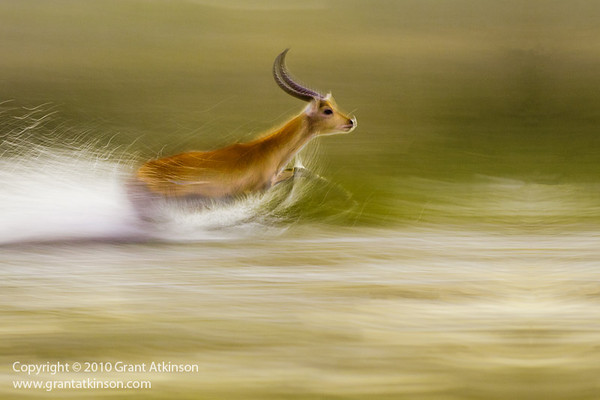 A male red lechwe sprints through a shallow water floodplain close to Tubu Tree camp in the Okavango Delta, Botswana. I took this image at 1/10sec at f/4.0, iso 400, using a Canon 40D and a 300mm f2.8 IS lens, handheld.

How the animal moves is also important. Those animals that walk or run without changing the height of their heads too much are easier to focus on. Animals that have rocking gaits with lots of up and down motion can be very hard to pan with. Panning with multiple subjects gives exciting results, but takes a lot of skill.

Animals that have some strong contrasts in their coats, or in their shape or features, also make better panning subjects. Some examples are the large round ears of the African wild dog, the strong black and white contrasts created by the zebra’s stripes, and the characteristic horns and mane of a wildebeest. The boldly marked coats of spotted cats also make them good subjects for panned shots, as do strong markings around an animals’ face. Dust kicked up by a fast moving animal will add to the image, as will splashing water.

Aside from shutter speeds, which we have discussed earlier in the text, there are other camera related points to be aware of. The toughest part of getting panning shots right is to learn to swing the camera smoothly, matching the subjects’ movement. Panning works best when using a tripod. In such instances one has only to concentrate on the smooth tracking of the subject as the camera is supported by the tripod. 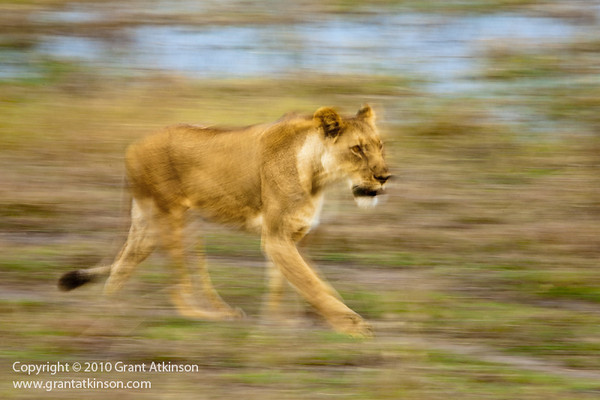 African Lion; Panthera leo; This lioness was photographed at Savuti in the north of Botswana. I lowered my camera’s sensitivity, and chose a slow shutter speed, to capture her movement as she passed by. Canon 5Dmk2, Canon 70-200 f/2.8IS lens, handheld. Shutter speed 1/6s at f/20.0, iso 100.

It is also possible to take panning shots whilst handholding and all the illustrative images accompanying this text were taken in that way. Many opportunities present themselves unexpectedly so it is worthwhile practicing the technique. It is critical to hold the camera as steady as you can, and to try and avoid any sudden upward or sideways shifts whilst the shutter is open. Take as many frames as possible when you have the subject lined up and it is moving by. Try to get a focus point placed on the subjects face or even better, the eye. Use a focus mode for moving subjects, like Ai Servo on a Canon, or AF-C (continuous) on a Nikon.

The objective is to try and get some part of the animal in focus. Convention states that the face and eye should be the sharpest part of the image, but as this is a very creative form of photography, I have seen many unconventional blur images that were very good but not typically composed.

When framing your image, if you are taking a single animal, try to get it large enough to take up a decent part of the frame, say about 25 percent or a little more. That way, the effects of the motion are well seen. If the subject is too far away these images lose much of their impact.

In bright light you may have to close down the aperture a lot to slow the shutter speed enough, and you may also have to drop the ISO setting to its’ lowest setting, like iso 100 or similar. Be aware that if you are shooting with very small aperture settings, like f22 or similar, you will achieve enough depth of field in your image that any dust spots on your sensor may become visible and may need to be removed using software from the image.

One of the best things about panning is that you can do it in quite bright light that might otherwise be too harsh for regular images, and still achieve decent results. It also works in very low-light conditions, so panning enables you to extend your shooting periods into conditions that are considered less than ideal for wildlife photography. Both the wild dog and red lechwe antelope images accompanying this text were taken long after the sun had set. As these images usually benefit strongly from careful processing, I find it best to shoot in raw mode, and get as much data as possible with my capture. 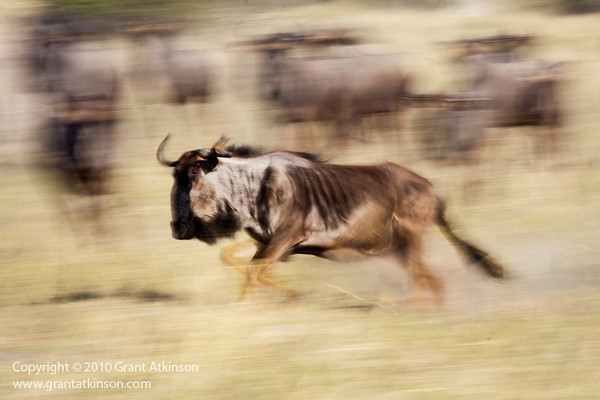 Good panning shots depend more on the skill of the photographer than his equipment. Absolute sharpness is not a criteria. Any DSLR with a reasonable autofocus system and a lens in the 100-300mm range should suffice. I have not personally tried to take panning shots with a compact camera but see no reason why it shouldn’t be possible.

All you really need is a subject moving past, a steady hand and a slow shutter speed. The results aren’t always what you might have been expecting, but if you keep at it you will have lots of fun and give yourself the chance of taking some very exciting and creative images.