Canon’s 5DSR and 5DS are at the time of writing, the highest resolution dslr bodies on the market.  With their 50 megapixel sensors, they are the best choice in the Canon camera line-up if very large print sizes are a priority. Although Canon’s marketing for these two cameras has been somewhat targeted at studio and commercial photographers, the camera’s themselves are very capable of delivering spectacular images for other users too.  The 5DS and 5DSR bodies are equipped with great autofocus, and good handling. They also have a continuous shooting rate of 5 frames per second, at full resolution of 50 megapixels. With such big files, it follows that the camera and its storage media are handling a lot of data.  This is a non-issue if you are shooting one image at a time. On the other hand, if you are doing any kind of continuous shooting, there are a number of things you may want to do, to maximize buffer performance and card recording in the camera.  Working in the way that I describe below, I have been able to minimize the chance of the buffer affecting my shooting in the field. 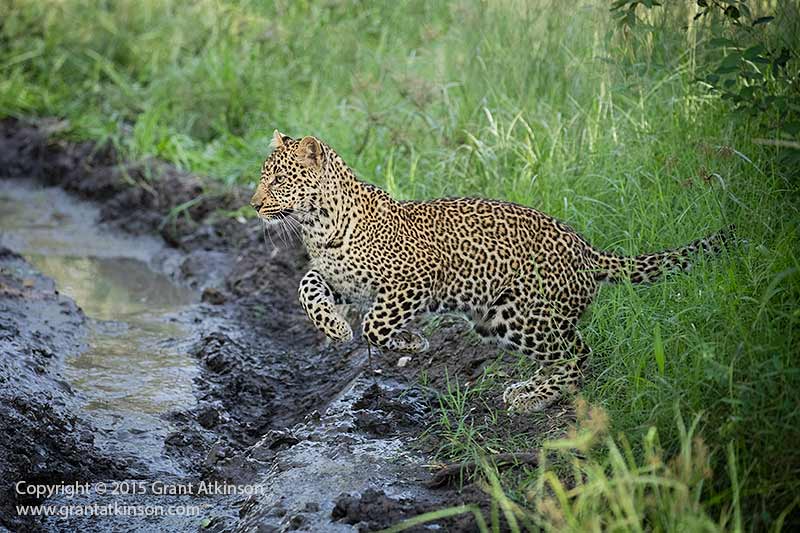 Perhaps the most important thing you can do to maximize continuous shooting performance, is to use fast cards.  The 5DSR has two drive slots, one for CF and one for SD.  In the Canon 5Dmk3, there is a very marked difference in the speed of these actual drives, regardless of what cards you use.  For that reason, I only use the CF drive on that camera (5Dmk3).  With the 5DSR, the SD drive is much improved and pretty close to the CF drive in performance.  In the 5DSR, with a 160mb/sec Sandisk CF card in the CF drive, the camera took 17 shots in a burst before slowing down, with the camera becoming fully operational after 3 seconds.  In comparison, with a 95mb/sec Sandisk SD card in the camera, it managed 16 frames in a continuous burst, and took around 4 seconds to be fully operational again.  Changing to a 90 mb/sec Sandisk CF card, the continuous burst dropped to 15 before the camera hesitated then took two more frames. Full responsiveness returned only after around 5 seconds. 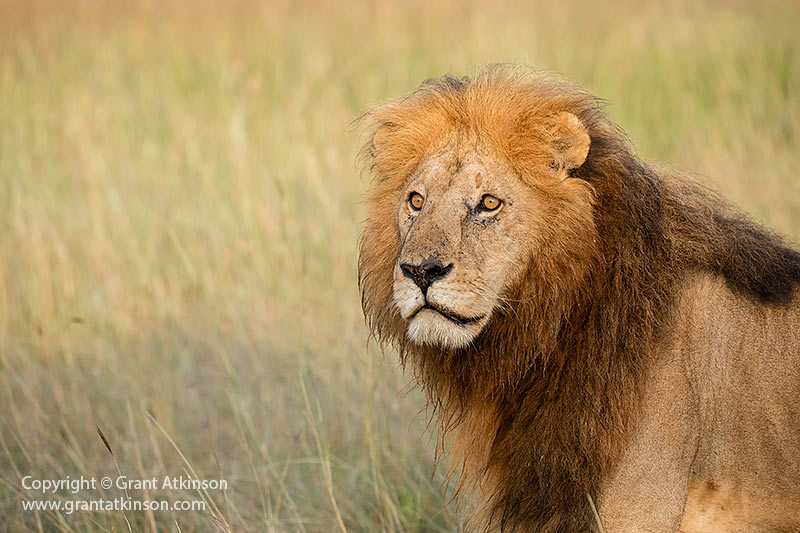 So there is a significant advantage to using the fastest available cards, whether they be CF or SD. The 160mb/sec cards give the most images in a continuous burst, and cleared the fastest, in camera.  I used only Sandisk cards in my testing as I was concerned only with comparing card speeds as well as the two differing card types. SD and CF.  It is my understanding that the CF drive in the 5DSR can write at 167 mb/sec so it may be that any faster CF cards might still improve on the best numbers I got using the current 160mb/sec cards.  File sizes were 68 megabytes approximately for this test.  Newer and faster SD cards might still offer a further increase in the total number of shots possible. 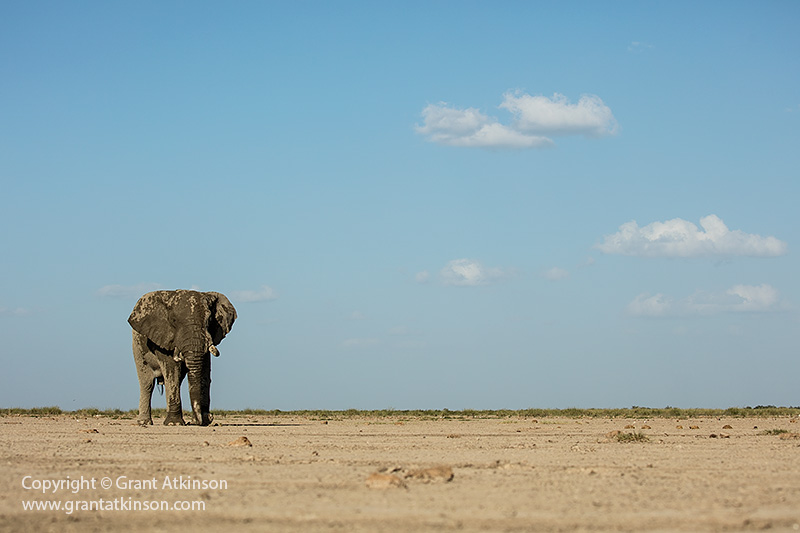 It is worth noting that file sizes of a 5DSR image (or any Canon CR2 image) will differ depending on how bright or dark the image is, how complex the image is in terms of tones and structure, and how high the iso setting is.  My own real-world, wildlife image files from the 5DSR range from 52 megabytes at the smallest, to 73 megabytes for the biggest.  It follows that if you are shooting a frame that gives you a bigger file size, buffer capacity and performance will be lower. Checking the two images posted above illustrate the different file sizes, the lion raw file was just over 70 megabytes, whilst the elephant file was only 54 megabytes.

If you wish to have your 5DSR achieve the maximum number of images for continuous shooting, it is worthwhile choosing your image quality settings with some thought.  For myself, this is easy, in that I set the camera to shoot RAW only. 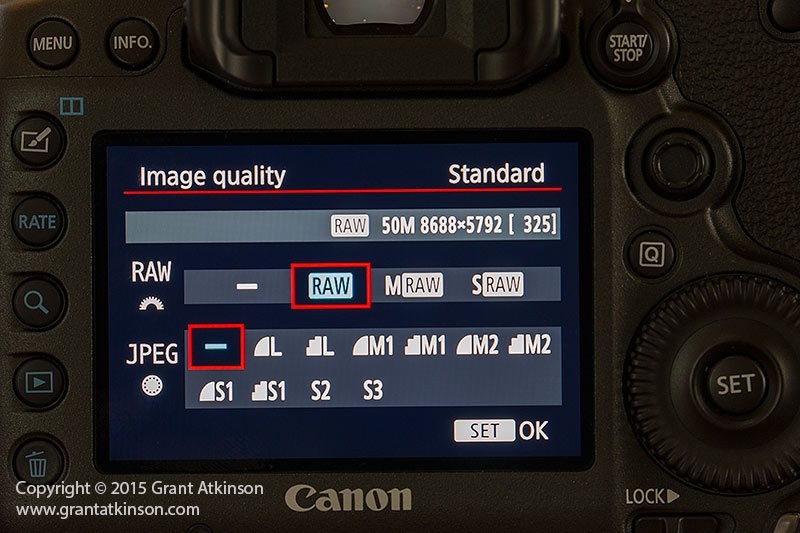 For my own shooting style, it is most important that I try to capture whatever wildlife activity might happen, at the time it happens, without any slowdowns whilst action is happening.  I feel that I have time later, to download the raw images and convert as many jpgs as I need.  If you prefer shooting jpg images only, the smaller files are much less taxing on the buffer and cards anyhow. Shooting any combination of RAW plus jpg image simoultaneously, really slows things down and will usually limit the cameras effectiveness for any kind of prolonged burst shooting.

So, if you are shooting RAW images, then there are further buffer and continuous shooting benefits to be had by limiting the in-camera processing that takes place when you take an image. The thing is, even if you are shooting RAW only, there are several processes that run during the creation of  the small jpg image that appears on your camera rear lcd when you take a shot.  I switch all five of these processes off in my camera, which in turn takes a little load off of the cameras processing and speeds. 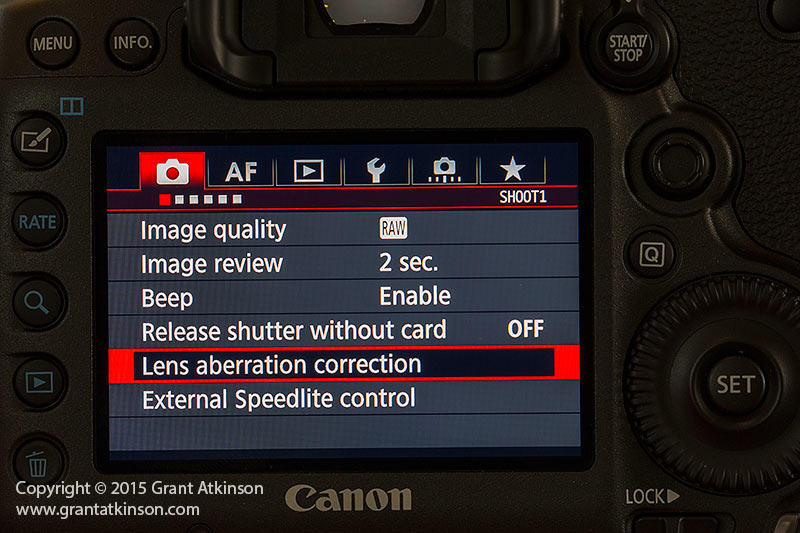 All these processing menu options are located in the Red Camera menu tab.  I select Lens aberration correction and Disable both options. 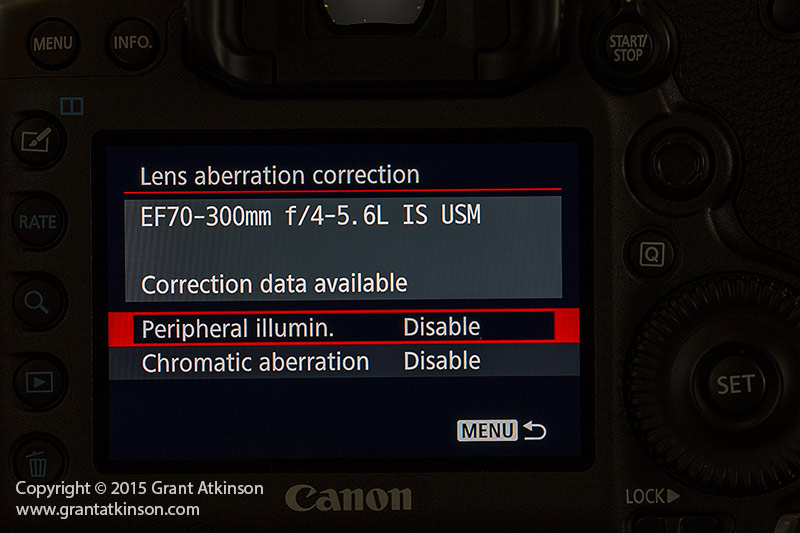 Peripheral illumination brightens the edge of the image, also known by the term vignetting.  Chromatic aberration correction gets rid of colour fringes usually seen in high-contrast edges in part of an image. I prefer to carry out these steps myself, in processing on my computer, so I choose the Disable option for both. 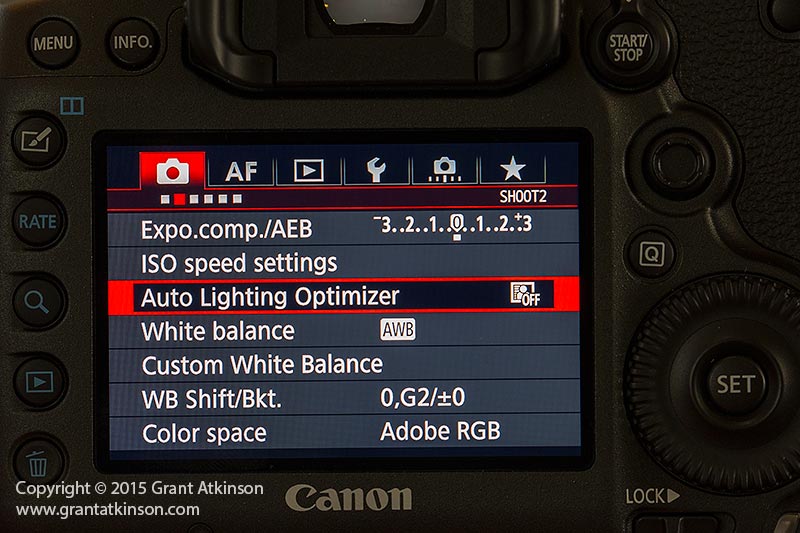 Auto Lighting Optimizer is found in the Red Camera menu, on the second tab.  It is basically a kind of shadow-lifting process that is applied in-camera. I prefer to turn it Off, and to carry out that work myself on my computer screen. 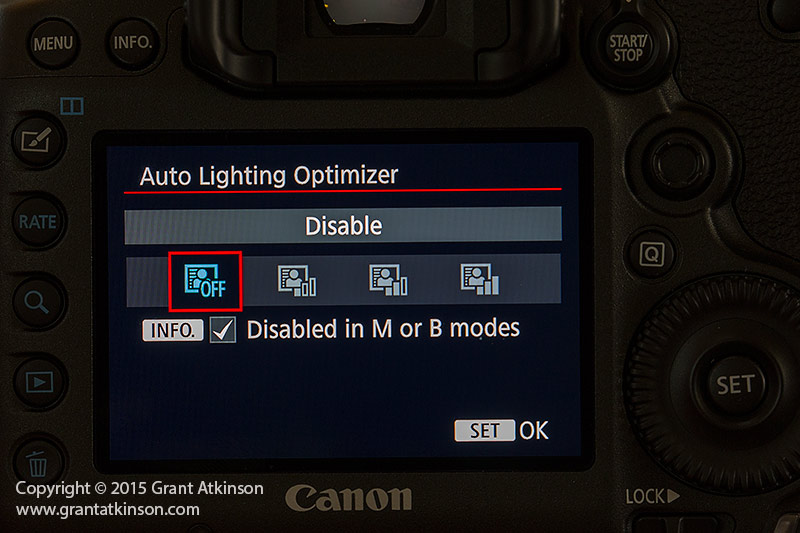 In the third tab of the Red Camera menu, are found still more processes that use up camera memory and can hinder buffer and card writing speed negatively.  I begin with Long Exposure Noise Reduction and turn it Off.  If I need to, I will switch it on again for night time shooting. 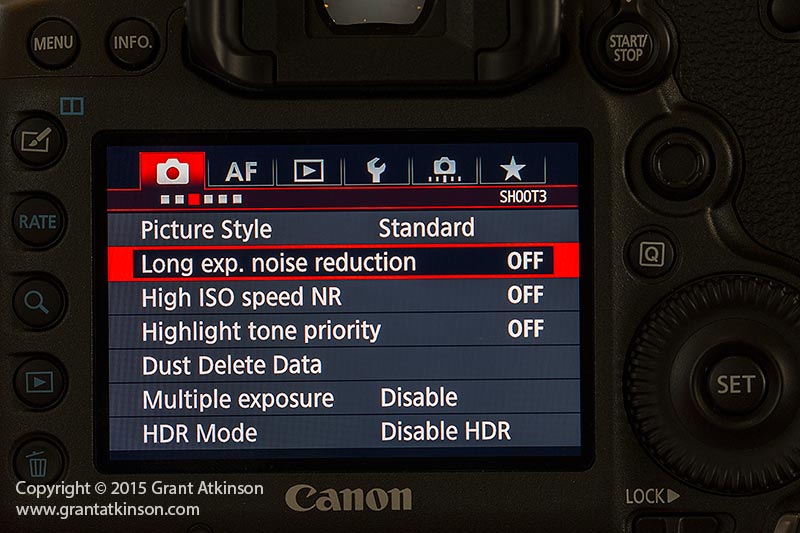 Turning High ISO Speed Noise Reduction to OFF is next.  I prefer to apply noise reduction in processing on my computer, where I can be more selective with where I apply it, and how strongly. 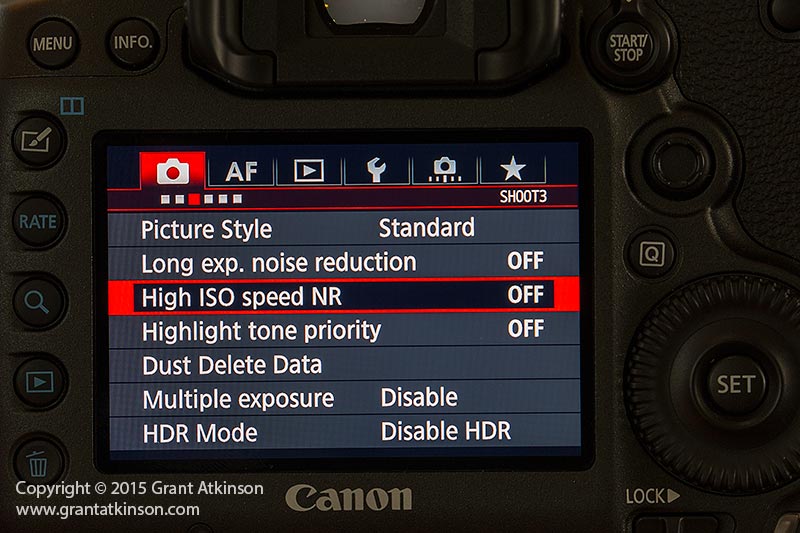 The last processing step to turn off, is Highlight Tone Priority.  This process recovers overly bright parts of an image, which is again something I might prefer to do myself on my computer. 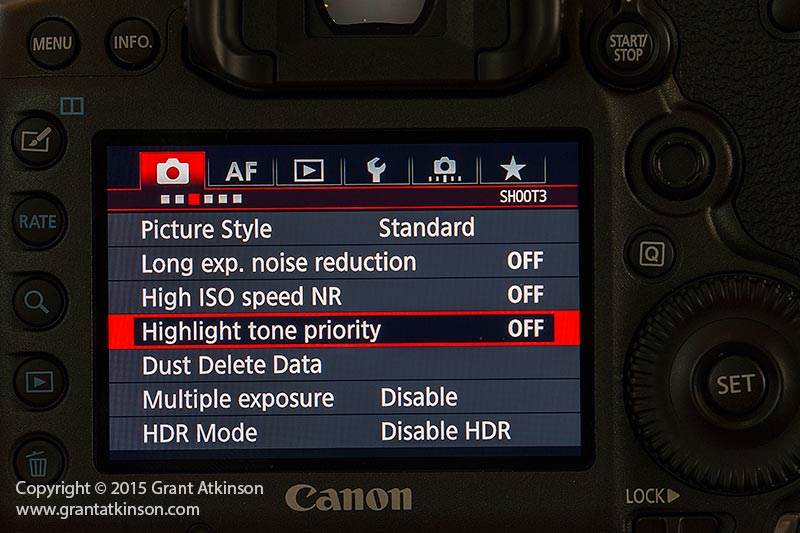 Even on those occasions when I am using Canon’s Digital Photo Professional software for processing, my preference is still to carry out those processing steps on my computer, rather than in camera.

If I am processing my RAW images using Adobe Camera Raw or Lightroom CC,  then I know that those programs ignore all the tags that might accompany Canon raw files anyway, so there is no disadvantage whatsoever to switching the processing steps off for me, just a gain in how quickly the camera clears images from the buffer, and in overall processing speed.

This text is written specifically for the Canon 5DSR (and it is all relevant to the near-identical 5DS), but almost all the menu options are similarly effective in maximizing performance in the Canon 5Dmk3 and the 7Dmk2, as well as other recent Canon dslrs.