When Wild Dogs Go To War

When one pack of African wild dogs catches sight of another pack, a chase or a fight typically ensues. Wild dog packs are territorial, and will defend those territories aggressively from other wild dogs that trespass. 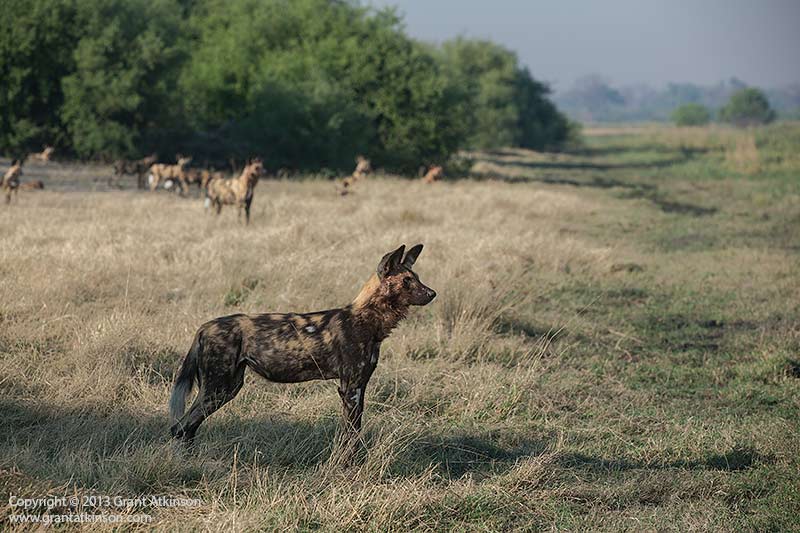 For almost a month, the two neighbouring packs of wild dogs that frequent the area around Savuti bush camp, had been aware of each other.  Both packs had denned successfully, and were moving with pups.  The Savuti channel was a barrier between them though, and neither pack appeared intent on crossing the water.

The Linyanti pack had 9 pups with them, around 5 months old, whilst their rivals and neighbours, known to us as the Zib (or Zibadianja) pack, had 11 younger pups that they were guarding.

Both packs were intent on claiming their hunting ground along the edges of the Savuti channel but the Linyanti pack were on the north bank of the river, whilst the Zib  pack were moving on the south bank.  At that time the waters of the Savuti had risen quite a bit, and the river presented a barrier of sorts to the wild dogs, especially with their youngsters in tow.  There are crocodiles in the Savuti, and the wild dogs are well aware of this. 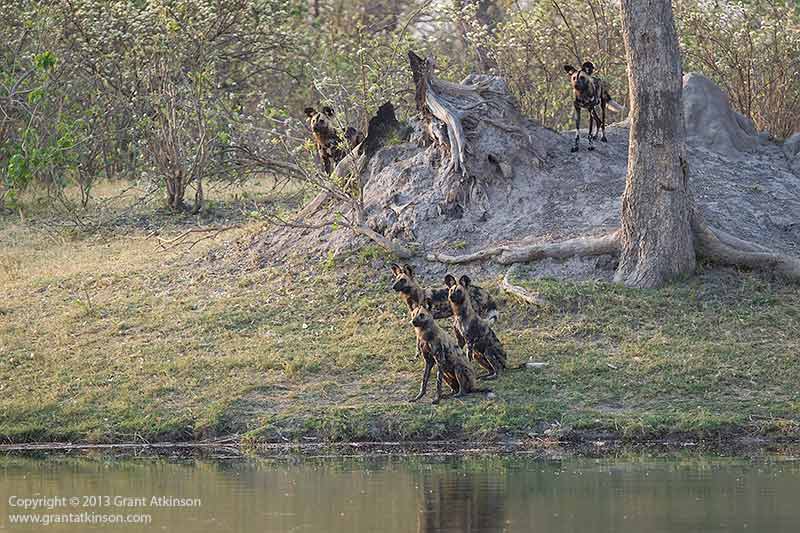 One afternoon we found the Linyati pack along the Savuti, at a place where the channel was at it’s narrowest.  On the other back was the Zib pack.  The two packs were very agitated, and were doing their best to intimidate the others.  The adults were racing up and down along the bank, making a loud, wailing noise, with their tongues curled backward.  The Zib pack appeared most aggressive.  They made short, splashing runs into the water, and then turned around. 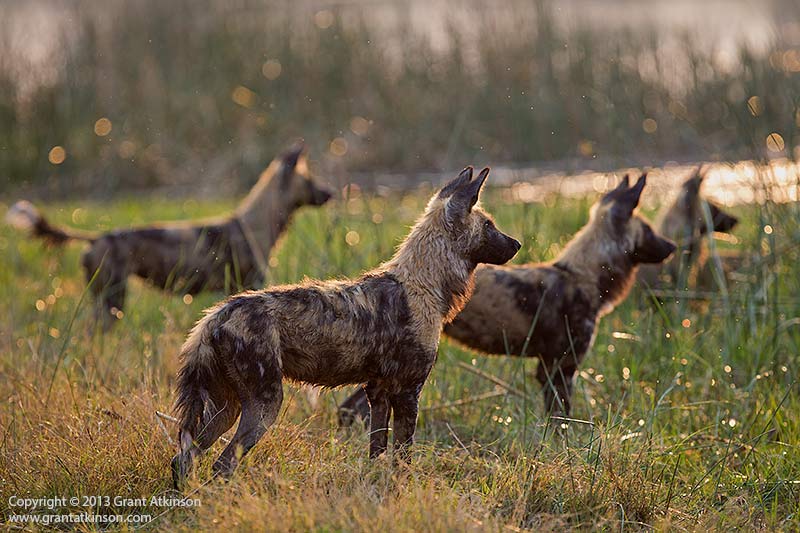 There was no sign of puppies for either pack, so I assumed that they were hidden nearby.  After almost an hour of wailing, staring, and chasing, the Zib pack entered the water, and began swimming to the opposite bank.  The dogs of the Linyanti pack were waiting for them, with several of the older males in particular showing aggressive intent. 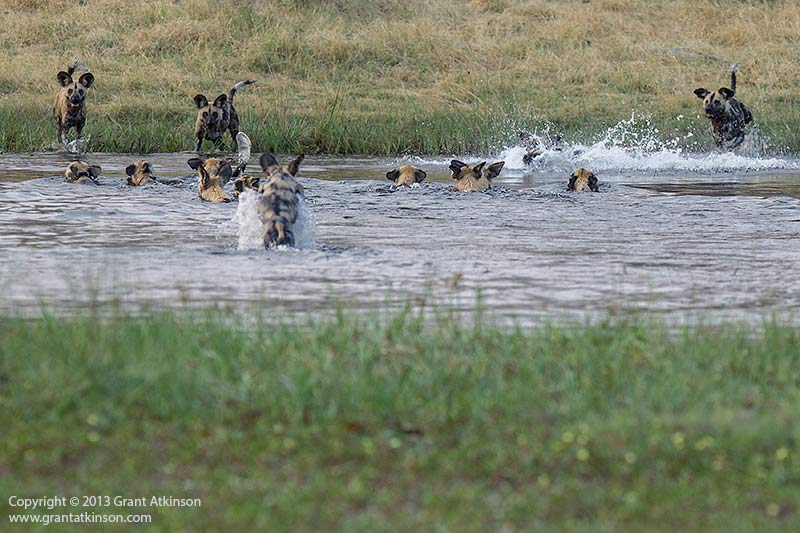 Chaos ensued as the two packs came together.  Within seconds, most of the dogs had disappeared chasing after each other into the woodland.  It all happened so fast that it was difficult to work out exactly what happened.  One dog was trapped in the water by a group of 3 others, and was badly mauled.  Another old dog from the Linyanti pack was badly bitten by a much bigger, younger male dog and took to the water to escape.  A female dog from the Zib pack turned away from the fight, and swam back over to the south bank, disappearing, perhaps to find her pack’s pups.

Within moments, all that could be seen were a few dogs from the Zib pack racing up and down the bank, and nothing else.  It was getting dark by this time, and as we made our way back to camp we could hear the mournful contact calls of wild dogs looking for each other in the woodland. 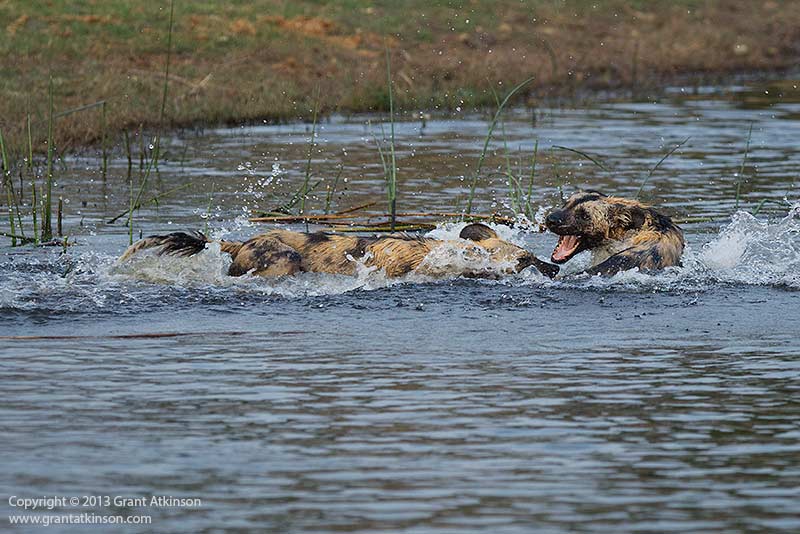 Over the next 3 days we gradually worked out what the aftermath of the clash was.  The Zib pack occupied the section of the north bank and they had all their puppies with them.  They were missing one adult dog.

The Linyanti pack had given ground, and were some 10kms eastwards, incredibly with all of their puppies alive and well.  There were two of the older adult dogs missing.

Witnessing the fight was exciting, but at the same time quite traumatic.  As much as it is nature’s way, I care a lot about wild dogs and dislike seeing them involved in potentially fatal fights.

I have been around when wild dog packs have clashed before, but on this occasion the barrier created by the river made it possible to watch the rising tension between the packs.  On several occasions prior to the fight, we had been with one pack when they became aware of their rivals over the water.

Interestingly enough, a few weeks after this fight, the Zib pack withdrew to the south bank, and the Linyanti pack once again occupied their old haunt along the north bank of the Savuti.

The events of that afternoon will always remain one of my strongest wild dog memories ever!