A legend of a leopard (the Dumatau male) 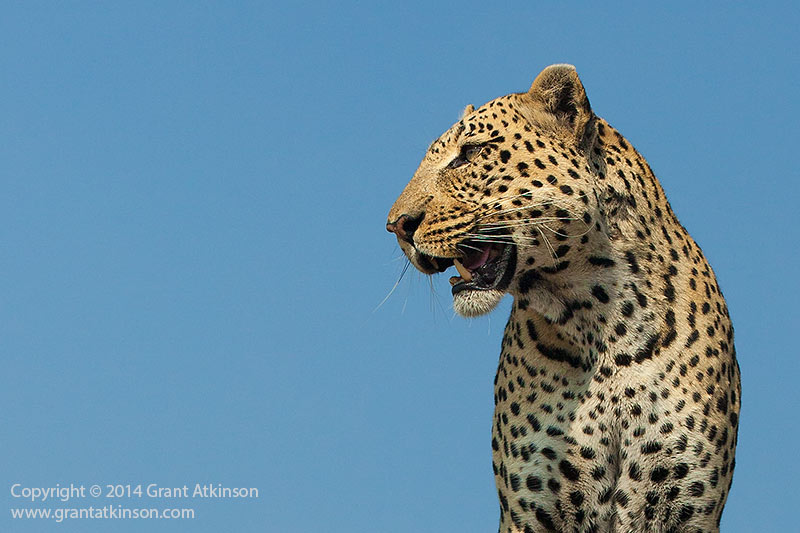 At the time of this writing, it is more than a year since the last sighting of the leopard known as the Dumatau male.  Given that he was at the very least, 12 years old the last time I saw him, it is quite likely, and natural, that his time has come and he may no longer be alive.

As a tribute, I thought of sharing some of the little I knew of this charismatic cat. I first came to know him back in 2005, whilst driving out of Savuti and Dumatau camps.  He was young then, but with an exceptionally thick muscularity to his frame. 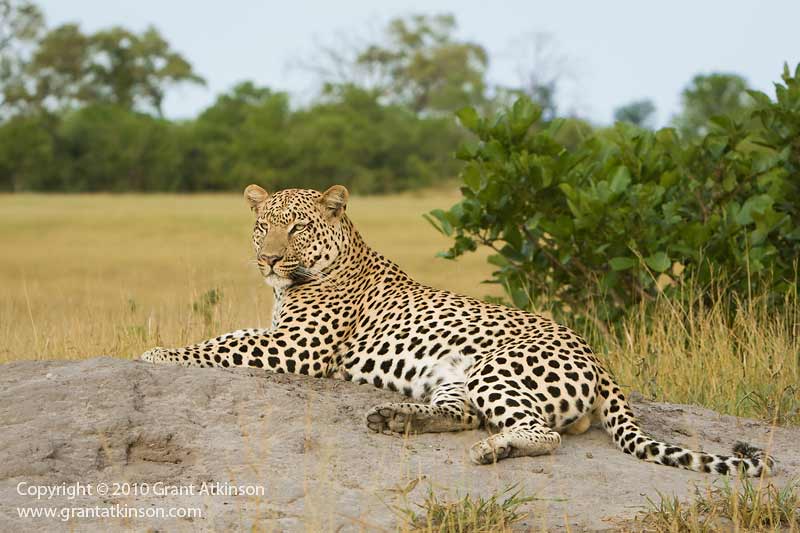 The Dumatau male in 2007, relaxing in the middle of the Savuti channel, which was dry at the time. Click for larger view

His coat was richly marked, and he was clean-featured, with little of the scars and wounds that a male leopard gathers over the years.

Back then, he was by far the most relaxed male leopard around Savuti.  This meant that we were able to view him without changing his behaviour.  He was never easy to find, often moving in thickly vegetated areas, but his total disregard of our vehicles meant that when we did find him, we could often spend decent amounts of time watching him.

The Dumatau male held a very big territory for a male leopard, including all the area between Savuti Bush camp and Dumatau camp, extending west to Zarafa camp.  He could cover ground relentlessly when on territorial patrol, and I remember an occasion when he walked more than 15 kilometres in one night. 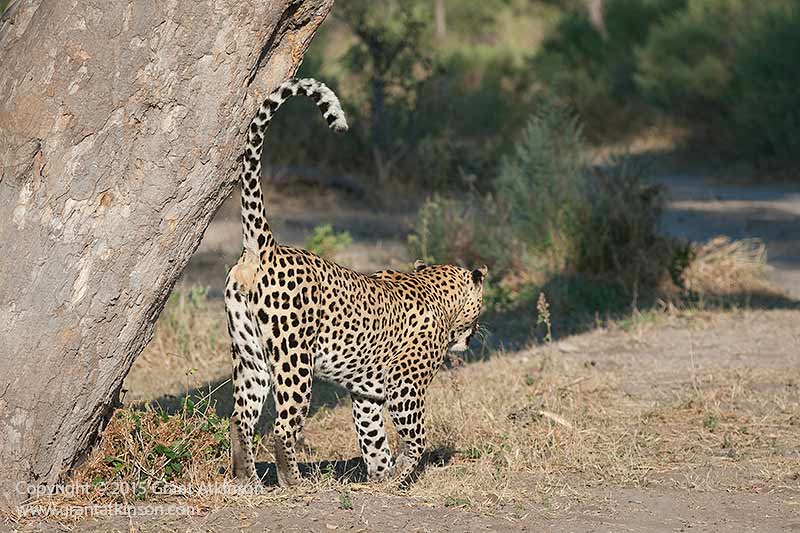 He defended this territory, or most of it, from 2005 right up until 2013, which is a long, long time for a male leopard.  Not only did he have to try keep out rival male leopards, but he also had to deal with the dangers that come from living in an ecosystem with competing predators like lions and spotted hyaena.

One morning he broke away from a territorial patrol, to engage five spotted hyaena that had just killed a warthog.  Somehow, the canny leopard managed to confront and confuse them for just long enough to snatch the dead warthog and make his way very rapidly, up a nearby leadwood tree.  The hyaena were so angry on that morning that they waited below the tree for hours, waiting for him to accidentally drop the carcass, but of course he did nothing of the sort. 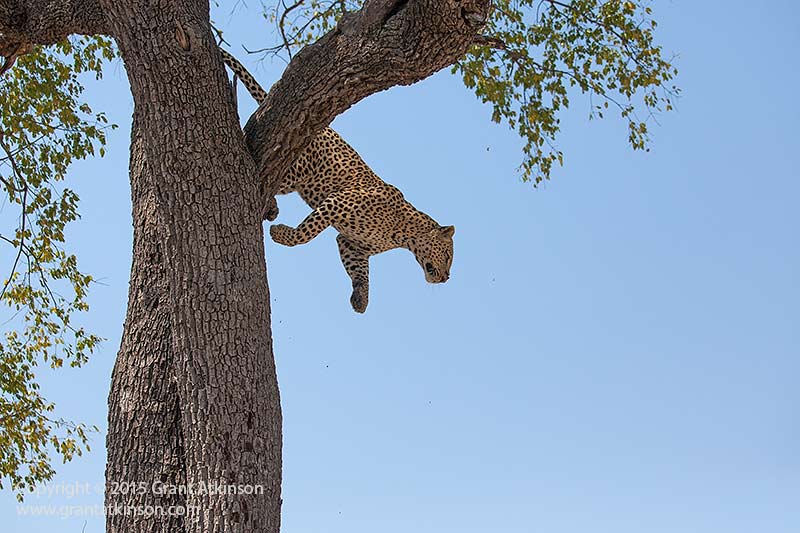 Finding him was always a thrill, and added excitement to any game drive.

Towards the end of one dry season, he injured his front leg, very badly.  It was swollen and he was walking with great difficulty.  As a solitary hunter, such an injury can lead to starvation very easily.  Not for the Dumatau male though.  A pair of male cheetah happened to kill a warthog, within sight of the resting leopard.  Without hesitating, he hobbled directly at the two cheetah, scaring them off and getting the kill all to himself.  He dragged it under cover, and ate and rested for days, ensuring his full recovery.  His charge of the cheetah was recorded in a wildlife documentary called Cheetah Blood Brothers, where the leopard was briefly cast as “the baddie”. 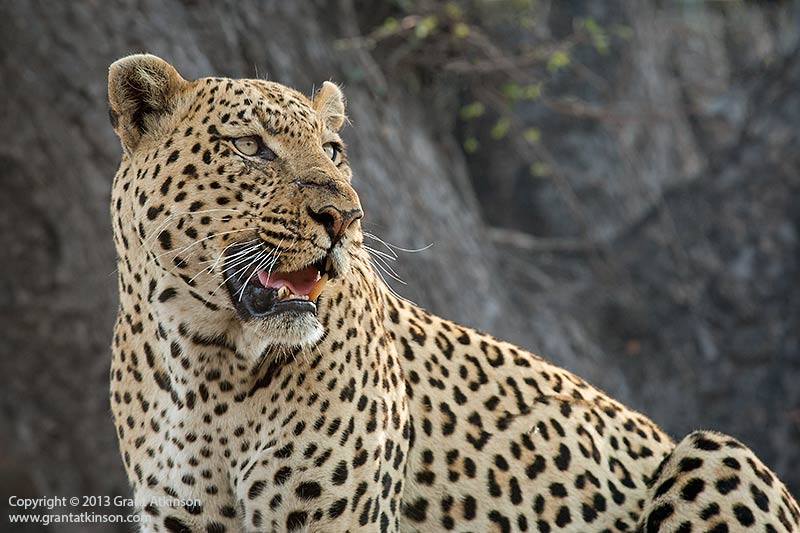 The Dumatau male, some weeks after successfully fighting off another male leopard and with wounds healing over. 2010. Click for larger view

The Dumatau male also came under pressure from other male leopards.  In 2010 some severe fighting took place.  We never saw the fight, only the consequences.  The resident cat had a terrible, deep gash that ran from his forehead almost to his nose.  His eyes were almost swollen closed.  We never saw the other male leopard at the time, but the Dumatau male remained in his territory, unshaken.  Six months later you could only make out the scar if you looked very carefully. 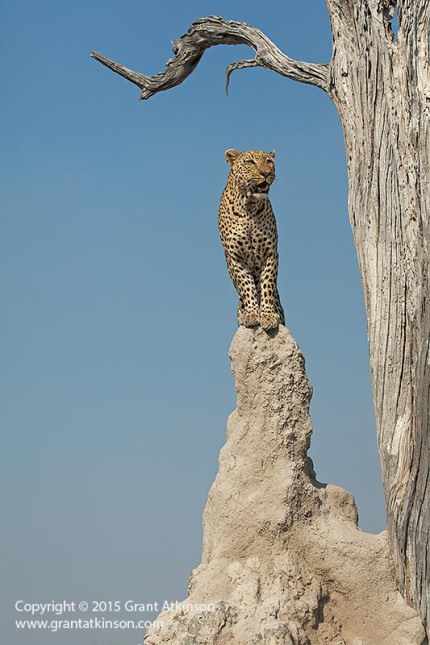 Standing tall, to survey the area for possible prey, 2011. Click for larger view

A friend and guide, Kane Motswana, watched the Dumatau male leopard being attacked by two female warthogs at once, whilst he was busy subduing a third. The leopard jumped up, and the injured warthog got away, or so it seemed. Kane followed the injured male leopard, who was now bleeding from open wounds on each side of his chest, for almost an hour until the determined cat tracked down the injured warthog.  He finished off the job, and recovered in time from the wounds.

Perhaps the wildest thing I ever saw happen to him was when he was coming to the end of a mating session with a female leopard.  She wandered off, but another friend and fellow guide Lets Kamogelo and I chose to stay with the male cat.  He was resting under a bush when Lets noticed a lioness stalking him. 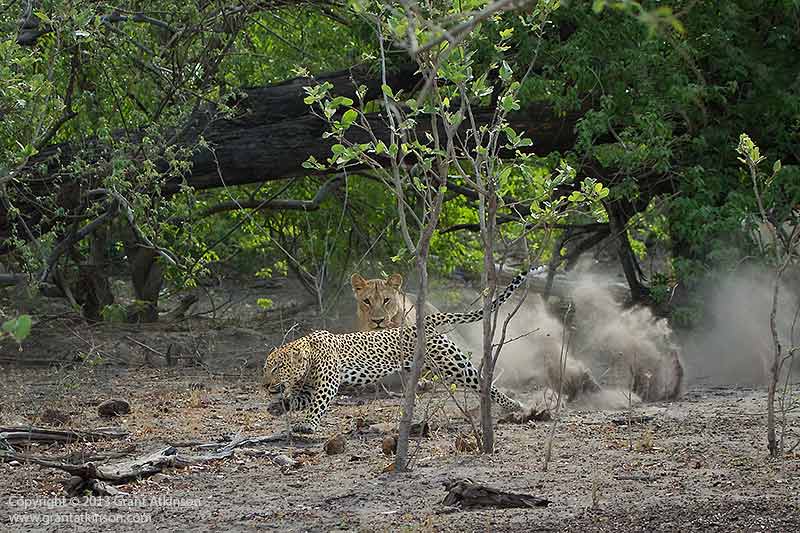 The leopard accelerating away from an attacking lioness, dry season 2012. Click for larger view

The Dumatau male only noticed the lioness at the very last moment, but he responded with the most incredible burst of acceleration imaginable, digging big holes in the sand as his paws powered him forward.  For one moment it seemed as if the lioness would intercept him, but he was too fast.  He virtually flew directly up the bark of a nearby tree, with the lioness attempting to follow him up for a short way. 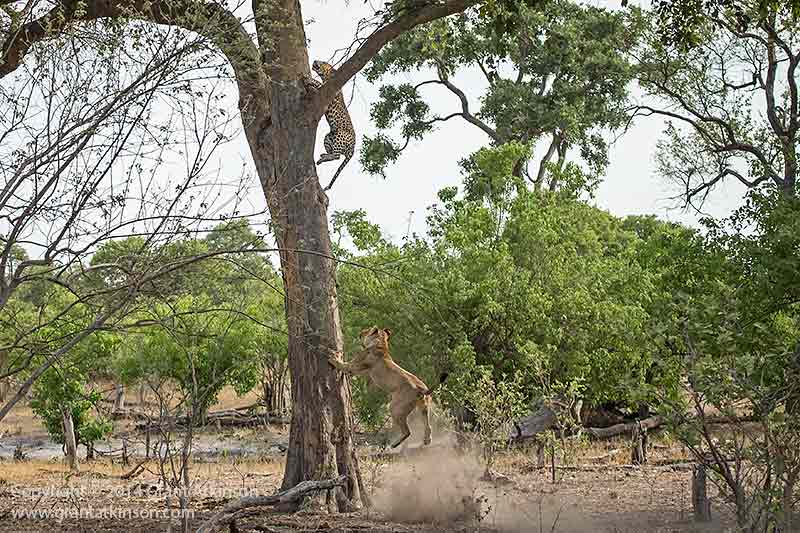 The male leopard escapes by racing up the tree, dry season 2012. Click for larger view

The instant that the lucky leopard reached the first fork in the tree, he stopped, and turned to watch the frustrated lion.  Then he set about calmly grooming himself.  You could not get a ‘cooler’ cat.

My last sighting of this special cat was late in 2013, from a boat, right where the Savuti channel flows out of Zibadianja Lagoon.  At first, we had no idea which leopard it was.  It was only as we drifted quietly closer that I was able to see his broken right canine tooth, which was the easiest way for me to identify him. That moment of recognition always brought about a feeling of happiness for me. Happy that he was still around, beating the odds, happy that we had found him, and that we could spend a little while watching him go about his day. 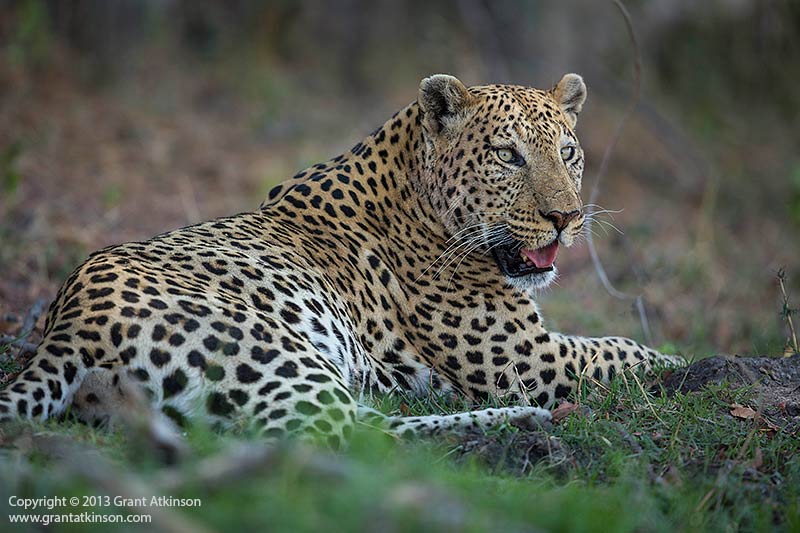 At rest close to the waters of the Savuti, 2013. Click for larger view

Although I no longer expect to see the Dumatau male when I am driving through the woodlands of the Linyanti, or beside the Savuti, I believe that perhaps something of his spirit lives on in the cubs that he sired and I am glad for that.