A Reunion Of Sorts

We were driving out of Mara Plains, in Kenya’s Olare Motorogi conservancy, when we came across a male cheetah.  Although cheetah are in decline in many parts of their range, this area remains a stronghold, and we enjoy fantastic viewing on the photosafaris I lead here.  The cat was alone, and the local guides, who knew him well, mentioned that he was part of a male coalition, one of two brothers. 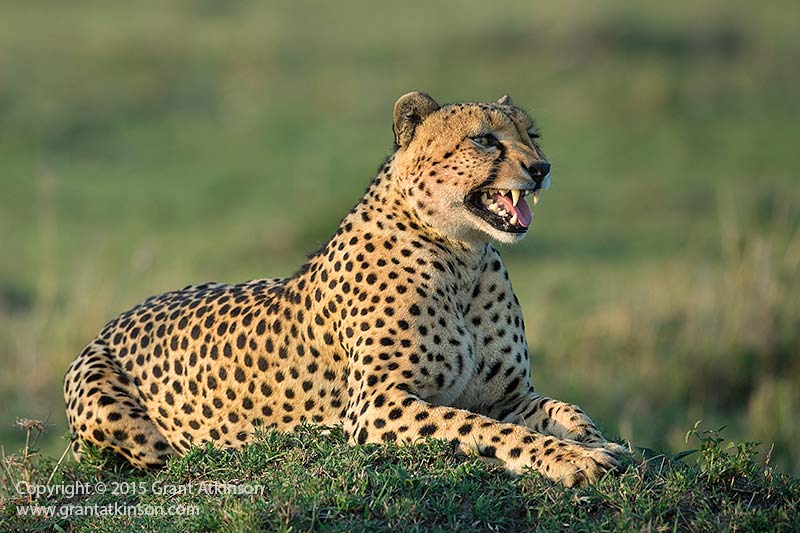 The cheetah was big, healthy-looking and well-fed, but clearly stressed.  He kept climbing mounds, making contact calls. Cheetah contact calls are high-pitched chirps that don’t sound very much like a big cat at all.  They do help cheetah find each other though.  This male was still showing the slightest wash of pink on the sides of his face, indicating that he had been feeding very recently.

Whilst we were watching him, we found out from another guide what had happened.  Earlier that day, the two cheetah had been feeding on a fresh kill when they were chased by lions.  Such instances can be very dangerous for the cheetah, as lions can and do kill them.  The cheetahs only chance is to run. Obviously the two cheetah brothers had become separated.  At that stage nobody had seen the other one, and the cat we were with was desperately trying to make contact with his missing brother. 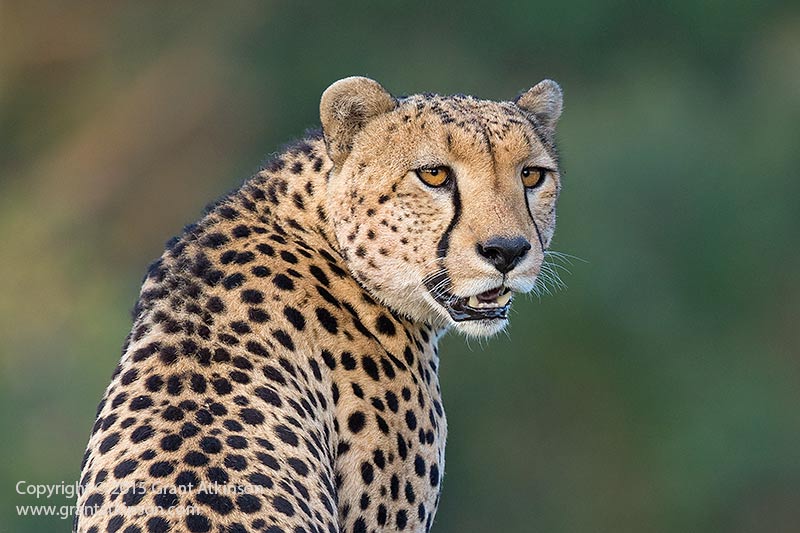 This cheetah had covered some ground, and put several kilometres  of distance between himself and the lions.

During the course of the morning, we managed to locate the missing brother, much to our relief.  He was headed in the direction of his coalition partner, but after a while, he stopped to rest.  This cat was also well fed, and uninjured, obviously having made good his escape from the lions.  He was not calling at all but instinctively following his brothers route.  We stayed with him, intent on watching the reunion.  Typically, when coalition males have been stressfully separated, their reunion is a joyous event.  We wanted to see this, and perhaps photograph it.  I made sure I had a zoom lens on, the Canon EF 70-300L f4-5.6 IS, so that I could change my framing quickly if there was action.

Much later in the day, after several rests, the wandering brother eventually walked into view of his waiting partner. Surprizingly, the first cheetah just crouched flat, and waited.  We were still expecting him to call out or make himself visible, but he remained completely still and silent.

The wandering cat walked closer and closer, but did not see his motionless brother.  He passed right by, and was perhaps 30 metres away when his crouching brother launched after him, from behind. A high-speed chase ensued, to our amazement. 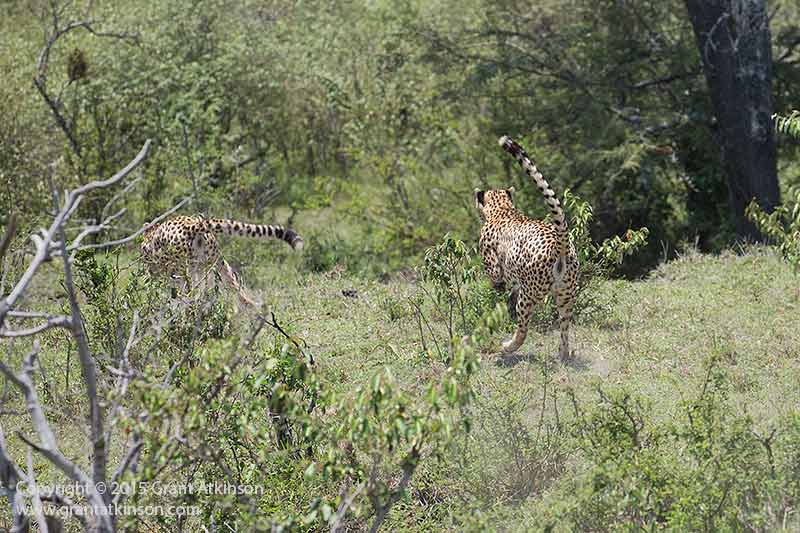 Suddenly the chasing cheetah broke off his run, with his brother just ahead of him, and they disappeared into the thick vegetation fringing the river and did not come out.

I had fully expected the two cats to come together happily the moment they were within one another’s line of sight.  Instead, the waiting cheetah had purposefully kept himself hidden and made no sound.  The chase that ensued did not appear to be of a playful nature, but it may have been.  I also wondered whether the resting cheetah was perhaps unsure of the exact identity of his brother, right up until he got very close to him.  Only then was he able to let down his guard.  Unrelated male cheetah are sometimes aggressive toward one another, and mistaking your brother for a territorial rival cheetah would be a disadvantage.  Neither of the two males was making any contact calls at the time, which would have made it easier for them to recognize one another.

The two big cats never emerged from the shady bushes until late that afternoon, appearing very content.  Although we did not get to see their eventual friendly coming-together, we did enjoy a fascinating sighting and a new lesson in animal behaviour.